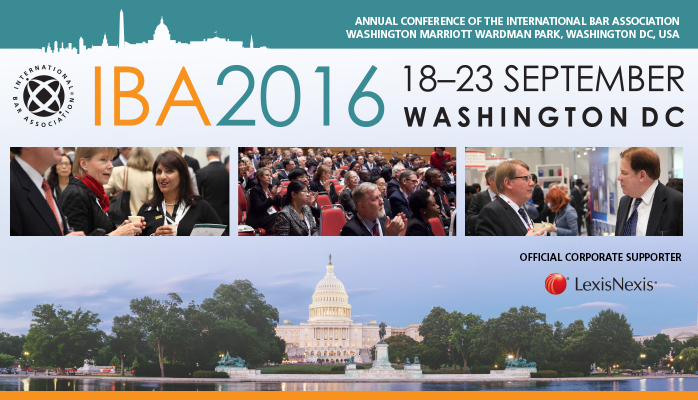 The 2016 International Bar Association (IBA) Annual Conference in Washington, DC, USA has featured substantive sessions, workshops and panels so far. Topics have ranged from current events in the world to contentious issues facing the legal profession.

In his opening speech at the session “Brexit of Bust? Better Together or the End of Europe as we know it?”, Former British Foreign Secretary, Jack Straw, explained why he believes Britain voted to leave the European Union, and laid some of the blame at the door of the European Commission.

He explained that as the UK moved from being the so-called sick man of Europe in the 1970s to one of its most successful economies – with unemployment levels in the country now at 4.9% compared with the eurozone’s 10.1% – membership became an increasing burden on the country. He cited Brits’ lack of emotional attachment to the idea of a union, the single currency and taking back control of immigration as some reasons why Britain voted to leave the EU.

Caroline Vicini, deputy head of delegations of the EU to the US explained that the so called divorce proceedings between the two parties will be arduous, largely because of uncertainty surrounding the UK’s wishes.
“No one knows what will happen,” she said. “Not even the Brits know what they are aiming for. No one has heard any sort of vision as to where the UK will end up,” added Vicini. “It is impossible to say how we will respond to a negotiating position that we cannot even fathom. Because we don’t know what the UK wants,” said Vicini.
Alexander Ritvay, partner at Noerr in Germany, while offering a perspective from the corporate world, was more positive. He opined that “It’s not the end of history. We have to get over it, Brexit might even have a positive impact.”

ICC in the Dock

The panel on the “Seventy years after the judgment at Nuremberg – has the US failed to Support International Justice at the ICC?” session looked at certain activities of the International Criminal Court (ICC), especially the use of untested evidence given by anonymous sources.

An ICC defence counsel in the Hague, the Netherlands – Caroline Buisman who has been involved in two high profile cases; the Katanga case involving 24-year-old Congolese warlord Germain Katanga convicted of war crimes committed in the Democratic Republic of Congo and the Ruto case on post-election violence in Kenya said “There is no transparency whatsoever and so we don’t know how prosecutors at the ICC make their choices.”
She pointed to a pattern showing the ICC approaching easy targets not chosen by the prosecutor’s office, which instead relies on other institutions, such as NGOs, to carry out the investigation.
For reference, she alluded to the Katanga case, in which the evidence submitted by the prosecutors was overlooked in favour of unverified evidence pointing to the defendant’s recruitment of child soldiers. This turned out to be false as, according to Buisman, the defence team found evidence showing that the witnesses had lied about their age and were not child soldiers.
“If you look at the two cases, there is absolutely no logic to it and African states are very unhappy with the ICC,” said Buisman. But she added that, in most cases, some of these states had called on the ICC to intervene.

The ICC’s procedures were also criticized for the manner in which they rendered verdicts. Panelists pointed out that judges often intervene by carrying out cross-examinations driven by their own political agenda.

A Guide to Lateral Hires

Lateral hires are at an all-time high, up by over one third since the post-financial crisis recession. They are also costing more money than ever – a study conducted by ALM Legal Intelligence estimates new partner hires in the US cost firms in excess of $1.3 billion in compensation alone every year.

When leaving for a new firm, a lawyer may be tempted to take with him the clients he has spent time and money developing a relationship with. This is all well and good but it’s not a straightforward matter.

In most regulated jurisdictions, such as the UK, US or Canada, the departing partner has strict duties towards their old firm – these can be contractual or regulatory. While ethical considerations are the same de facto in less supervised areas, in practice, things may be different.

This means that legal practitioners and their firms need to be clear and transparent about their movements and their duties, cooperate with the client and with each other, and not defer or wait to transfer any work, which could cost time or money. This means informing their law firm of their intention to leave before informing their client.

A Global Problem: How can the legal profession maintain its independence?

The World Economic Forum’s Global Competitiveness Index includes a global ranking of countries according to their level of judicial independence. Significantly, most of the usual suspects such as the UK, Canada, Germany or Honk Kong ranked highly both in the competitiveness and independence categories. For the US and China, (however, while the former was certainly true,) they ranked 28th and 68th respectively, out of 140 countries profiled. This proofs there is still some work to be done globally to ensure lawyers are free from any undue interference.

In its report, the IBA Task Force has identified a number of threats that impede lawyers’ ability to carry out their duties in line with professional standards and the rule of law. According to Sylvia Khatcherian, deputy general counsel at Bridgewater Associates, and co-chair of the IBA Presidential Task Force on the Independence of the Legal Profession, the IBA Task Force has focused on some key threats that are more or less on a global scale.
For instance, the Task Force gathered information which showed that lawyers in some jurisdictions, especially human rights defenders, are routinely harassed and persecuted by governments or even the public. Such jurisdictions in the news recenlty have included Bangladesh, Burundi and Turkey.
In China, it is estimated that nearly 250 lawyers and human rights campaigners have been jailed since July 2015. Most recently, Zhou Shifeng, a Chinese lawyers known for taking on cases against the PRC government – including exposing the tainted baby milk scandal in 2008 – was found guilty of subversion and jailed for seven years.
“The risk of arbitrary punishment or imprisonment, physical violence, or even death, can dissuade lawyers from undertaking cases that the government or the public find objectionable,” says Margery Nicoll, deputy secretary-general & director, at the Law Council of Australia, and chair of the Bar Issues Commission. “This, in turn, effectively takes away a lawyer’s ability to make an informed, impartial and independent choice.”

The independence of the legal profession is enshrined on the international level in the United Nations Basic Principles on the Role of Lawyers. They were adopted in 1990 by 8th United Nations Congress on the Prevention of Crime and the Treatment of Offenders, held in Cuba. One of the principles outlines that governments need to ensure that lawyers are able to perform all of their professional functions without “intimidation, hindrance, harassment or improper interference.”

There is no single solution to remedy threats to lawyers’ integrity and ability to carry out their professional duties. But to effectively tackle threats emanating from the government, there must be both national and international cooperation.

The IBA’s own standards call on the professional associations of lawyers, which it says have a vital role to uphold professional standards and ethics. Beyond that, it says that governments worldwide should respect the proper role of lawyers within the framework of their national legislation and practice. “This is a scenario where it is very important for the IBA and our member bar associations to work together,” says David W Rivkin, President of the IBA. “We need to consistently demonstrate to the public why it is so important that the bar is independent,” he adds.

Predicting the Next Crisis

US and European counsel and regulators are warning another financial crisis will occur. And while much has been done to improve financial stability, and future bank sector resilience, there are limits to how far the law can protect against raw economics.
“The next financial crisis. Will it come? For sure. And this time it will be totally different,” said Joanne Kellermann, director of resolution planning and decisions at the European Single Resolution Board during yesterday’s panel on the topic. “It will certainly cause a lot of work for lawyers, so rest assured,” she added.
Individual jurisdictions have spent the best part of the decade that followed 2008 transposing new internationally-agreed financial regulation into law. In the US, that process centered on one bumper bill: the 2010 Dodd-Frank Act. In Europe, where the legislative system doesn’t lend itself to single bills, over 40 relevant individual directives and regulations have been released.
According to Hendrick Haag, partner at Hengeler Mueller, important work has been done. As one example, he cites how banks now hold far more capital to hand than before. Although, that higher capital has yet to be tested. “Whether this is really going to be comforting in a crisis still remains to be seen,” said Haag.

NBA-NEC Addresses Review of Scale of Charges for Lawyers, Other Issues...