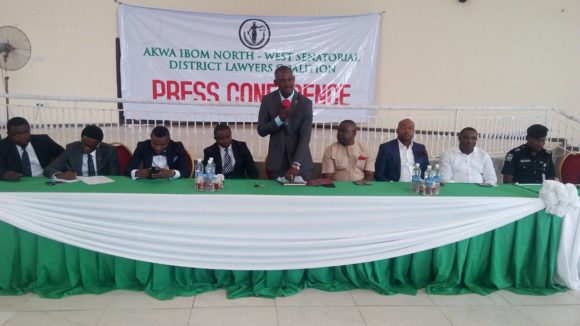 The group made the condemnation yesterday during a press conference at Abak Independence Hall. While giving his opening remarks, the co-ordinator of the body, Barr. Patrick Umoh said; “We have observed with utter dismay recent publications by online media practitioners and on local tabloids against the personality of the Senate Minority Leader, Senator Godswill Akpabio.

“It is on this note that we wish to express strong condemnation on these publications as these are false and calculated to undermine the person of His Excellency, Senator Godswill Akpabio” Barr. Umoh also noted that Senator Akpabio has sacrificed tremendously for Akwa Ibom State, adding that some people only resorted to cheap blackmail in a very desperate attempt to gain cheap popularity.

The group therefore stressed that it would undertake pro bono to explore legal resources against any person or group of persons that is attacking the image of Senator Akpabio.

“Consequently, the Akwa Ibom North- West Senatorial District Lawyers Coalition has resolved to rise defence of a man of honour whose identity as a lawyer remains unassailable.