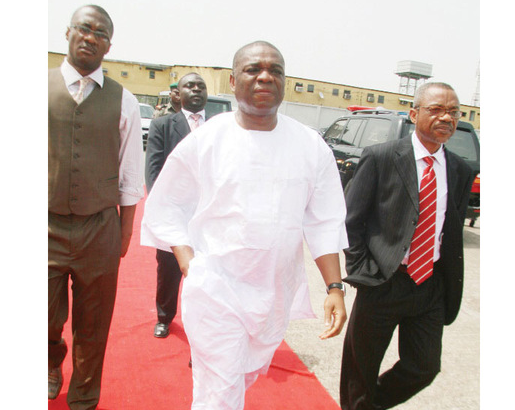 About eight years after the case was stalled, the Economic and Financial Crimes Commission (EFCC) on Tuesday recommenced the trial of former Abia State Governor, Orji Uzor Kalu and two others.

Kalu, his ex-aide, Jones Udeogo, and the ex-governor’s company, Slok Nigeria Limited, were re-arraigned on a 34-count charge before a Federal High Court in Abuja.

Before the arraignment, Kalu and others had argued against the proceedings and urged the court to await the pending appeal by Slok before the Supreme Court.

Trial judge, Justice Anwuri Chikere, rejected the defendants’ objection to their arraignment and ordered that the charge be read out to them.

In the amended charge, Kalu and others were accused of diverting about N3.2billion from the Abia State Government’s treasury during his (Kalu) tenure as Abia State governor.

They pleaded not guilty when the charges were read out to them, following which the court granted them bail on the terms attached to the one granted them in April 2008 by Justice Adamu Bello (now retired).

The court adjourned to December 6 for the commencement of trial.