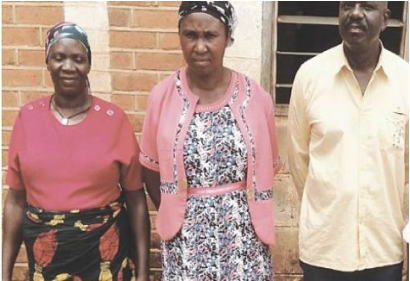 A pastor, Timothy Ngwu, was on Monday docked at an Enugu North Magistrates’ Court for allegedly marrying another man’s wife, daughter as well as another woman.

The pastor’s wife, Veronica Ngwu, was said to have petitioned the court over the development.

The victims whom Mr. Ngwu converted to his “wives” were said to be members of his church: Gods’ Favour Ministry, Nsukka.

One of the victims, Calista Omeye, however, told the court that her husband, Fidelis Omeye, had persuaded her to meet the pastor as he wanted her to do the will of God through the pastor.

“My husband was a member of the church and he introduced me to the church, because he said that the pastor had a revelation for me (Calista),” Mrs. Omeye said.

She said the revelation had to do with the will of God “but he later left the church but I refused to leave the church with him.

“I have 10 children for him and we were all members of the church before he quitted and I had a baby for the pastor but the baby died after some weeks,” she told the court.

She said that it was with her husband’s consent that their daughter was given to the pastor in marriage.

“It is not true that I gave out our daughter in marriage to the pastor without the consent of my husband, he was aware of everything,” she said.

Mr. Ngwu, who hailed from Ihe-Owerre, Nsukka, was absent from the court as he was said to be on admission at a hospital in Enugu.

The presiding magistrate, R.I. Oruruo, adjourned hearing in the matter to September 26.

In another development, the magistrate sentenced 17 youth from Amuzam-Ugwuaji in Enugu North Local Government Area to three weeks’ imprisonment for conspiracy and unlawful assembly.

The accused persons were in 2013 arraigned for malicious damage of a building under construction belonging to one Charles Maduekwe, at Independence Layout, Enugu.

The complainant had told court that he invested over N20million on the project before the incident occurred.

Mr. Maduekwe said that he invited some military men to arrest the accused person who later handed them over to the police.

He said the military men recovered hammers and other dangerous weapons used by the accused persons to perpetuate the crime.

Meanwhile, the President General of the town, Emmanuel Nwafor, said that the disputed land belonged to the community.

He said no external body had ever claimed the land or bought it from the community.

He alleged that the youths were waiting for the elders to allocate the land before the military arrived and whisked them away.

“We did not destroy any pillar or building as the land was covered by weeds. We only went there to share the land.

“It was when they refused to leave the land that some military men arrested them,” he said.

Ruling on the matter, Mrs. Oruruo said the evidence before the court showed that there was a conspiracy among the accused persons to commit a crime and unlawful assembly to breach public peace.

She, therefore, sentenced the accused persons to three weeks imprisonment each, with a N10, 000 option of fine.