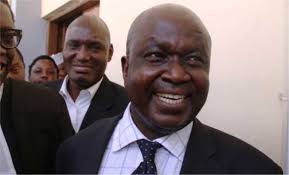 The Lagos Division of the Court of Appeal will on January 19, 2017 hear an appeal filed by embattled Senior Advocate of Nigeria, Rickey Tafar, challenging the the refusal of a Lagos State High Court to quash the bribery charge filed against him by the Economic and Financial Crimes Commission (EFCC).

Tarfa was arraigned before Justice Adedayo Akintoye of the lower court on March 9, on a 27 count charge of refusing to declare his assets and offering gratification to a public officer.

The lawyer was alleged to had internationally gave the sum of N1.5 million to Justice Nganjiwa Hyeladzira Ajiya of a Federal High Court in Lagos, on June 27 2012, directly from his Zenth Bank Account No 1002926967, in order that the said judge acts in the exercise of his official duties.

The accused person was also accused of intentionally given the same Judge ‎the sum of N500,000, on the same day, in order that the said judge refrains from acting in the exercise of his official duties.

He pleaded not guilty to the charge and was granted bail on self recognizance.

However, Tarfa, through his defence team, comprising about 34 Senior Advocates of Nigeria, filed a motion on notice, challenging the jurisdiction of the court to entertain the case

In a ruling, the trial judge, Justice Akintoye dismissed the application and held that she has jurisdiction to entertain the case.

Dissatisfied, Tarfa filed Notice of Appeal and urged the appellate court to allow his appeal and set aside the ruling of the lower court.

At the appellate court on Tuesday, appellant’s lawyer, Biodun Owonikoko (SAN) informed the court that the record of appeal had been compiled and transmitted, adding that the appeal is ripe for hearing.

Also, EFCC lawyer, Rotimi Oyedepo informed the court that the Commission has filed it’s briefs and was ready to argued the appeal.

Consequently, the presiding Justice, Justice Mohammed Lawal Garuba fixed January 19 for the hearing of the appeal.

Tarfa had urged the lower court to quash the 27 counts filed by the EFCC, claiming that the EFCC had no statutory power to try Tarfa on those charges.

They had rgued that the proof of evidence supplied by the EFCC failed to support the charges, describing the charges as incompetent and an abuse of court processes.

They prayed for an order of the court restraining the EFCC from further investigating or prosecution Tarfa in relation to the subject matter.

But, Justice Akintoye said she found enough substance in the proof of evidence placed before the court by the EFCC to warrant calling for the trial of the case.

“There are alleged crimes and the applicant has allegedly committed those crimes by the proof of evidence filed before the court. I hold therefore that the information filed before this court disclosed a prima facie case which must be addressed,” the judge held.

In refusing Tarfa’s claim that the charges amounted to a violation of his rights, the judge referred to provisions of the EFCC Establishment Act which imposed on the anti-graft agency “the statutory duty, obligation and mandate to investigate and prosecute all cases of economic crimes.”

The judge upheld the argument of the EFCC that a court of law could not restrain a statutory body from performing its statutory duties.

She held, “There commission is therefore duty-bound to perform its statutory duty without interference from external body, including but not limited to the court.

“This court will, therefore, not restrain the Economic and Financial Crimes Commission from performing any of its statutory duties in respect of anyone including the applicant in this case. I hold that this court has the jurisdiction to entertain the information/charges dated 10th of March 2016.”

In the 27 counts filed against him, the EFCC, among other things, also accused Tarfa of supplying false information to it.

NBA Benin Sets Up Committee on Sexual and Gender Based Violence