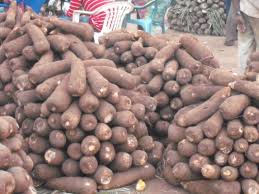 A Karmo Grade 1 Area Court in the FCT on Thursday sentenced a sales boy, Victor Michael, to one month jail term for stealing 160 tubers of yam.

The judge, Mr Abubakar Sadiq, who, however, gave the convict an option to pay a fine of N5,000, warned Michael to desist from committing crime.

The judge then ordered that the 20 tubers recovered from the convict be returned to the owner.

Earlier, the prosecutor, Dalhatu Zannah, had told the court that the theft was committed between July 30 and Aug. 24, 2016, where Michael continued to steal the yams without his manager’s knowledge.

Zannah said that the matter was reported by Olaitan Mahmud of Jabi Garage Shop 230, Abuja, at the Utako Police Station.

The prosecutor added that the convict had admitted stealing the N80,000-worth of yams during investigation but only 20 tubers were found and recovered from him.

He said the offence contravened Section 289 of the Penal Code.

The convict pleaded guilty and begged for leniency.