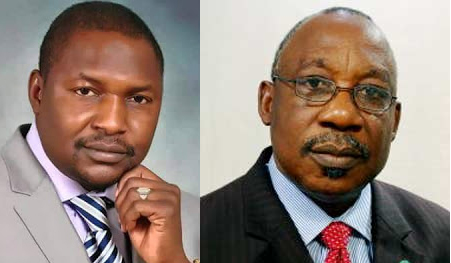 Lead Council to Chief Inibehe Okori at the 2015 Akwa Ibom State National Assembly Election Petition Tribunal in Abuja, Chief Assam Assam (SAN) and the Attorney General of the Federation (AGF) and Minister of Justice, Abubakar Malami (SAN) last week engaged each other in a shouting match at the Federal Ministry of Justice in Abuja.

Trouble started when Assam who has been in the news since last week for the wrong reasons confronted the Minister requesting that he facilitates the process for him (Assam) to handle one of the Federal Governments briefs either on the repatriation of stolen funds or the prosecution of former Akwa Ibom State Governor, Senator Godswill Akpabio whom the government is investigation on allegation of corruption, abuse of office and embezzlement of public funds.

Assam who was Okori’s lawyer against former Akwa Ibom State Governor, Chief Godswill Akpabio at the tribunal unfortunately met a furious Malami who told him pointblank that no government can believe him nor take him serious owing to his antecedence of compromising any legal case he (Assam) handles. Attempt by Assam to further plead with the Minister escalated the anger of the Attorney General who flared up and ordered Chief Assam to leave his office. “You this Akwa Ibom man. You think we don’t know you. Leave my office and never come back here”, Malami allegedly thundered.

Security agents at the office of the Minister of Justice were allegedly ordered to escort Assam out of the building when he hesitated. The face-off between Assam and the Minister of Justice comes just days after Assam, a former Akwa Ibom State Attorney General and former Nigerian Ambassador to Russia was highly criticized for leading a factional delegation of G22, comprising former 2015 Akwa Ibom PDP Governorship aspirant to meet Akwa Ibom State Governor, Udom Emmanuel.

Judges, Senior Lawyers locked Out at the Swearing in of New...