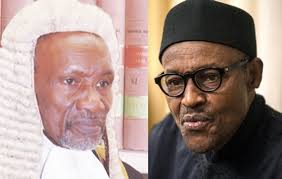 With less than a week left for the incumbent Chief Justice of Nigeria (CJN), Justice Mahmud Mohammed to retire, the time to appoint a successor is fast running out for President Muhammadu Buhari.
Justice Mohammed will retire on November 10when he will turn 70, the mandatory retirement age for justices of the Court of Appeal and the Supreme Court.
By virtue of Section 231 of the 1999 Constitution, it is the prerogative of the president to appoint a CJN.
Section 231(1) explicitly provides: “The appointment of a person to the office of Chief Justice of Nigeria shall be made by the President on the recommendation of the National Judicial Council (NJC), subject to confirmation of such appointment by the Senate.”
At its emergency meeting held on October 11, 2016, the NJC had recommended Justice Walter Samuel Onnoghen for consideration as CJN.
If his name is submitted and he is confirmed by the Senate, Onnoghen will be the first person from the southern section of the country to occupy the post in almost three decades. Justice Ayo Irikife was the last southerner to occupy the post of the CJN between 1985 and 1987.
However, with less than a week to the retirement of Justice Mohammed, the president is yet to forward the name of his nominee to the Senate for clearance. This can still be done within the next few days, however.
Going by convention, the most senior justice has always been appointed CJN. In this regard, Justice Onnoghen is favoured to emerge as the next CJN.
However, in law, the president is not bound to accept his nomination. He also cannot bypass the council in making the appointment.
If for any reason, the president does not want to appoint the recommended justice, he is at liberty to ask the NJC to recommend to him another suitable candidate for the office.
A source at the Senate revealed that the Senate president was yet to receive any letter from the president regarding the appointment of a new CJN.
Section 230(4) of the Constitution is also instructive. It provides that “if the office of the Chief Justice of Nigeria is vacant or if the person holding the office is for any reason unable to perform the functions of the office, then until a person has been appointed to and has assumed the functions of that office, or until the person holding the office has resumed those functions, the president shall appoint the most senior justice of the Supreme Court to perform those functions”.