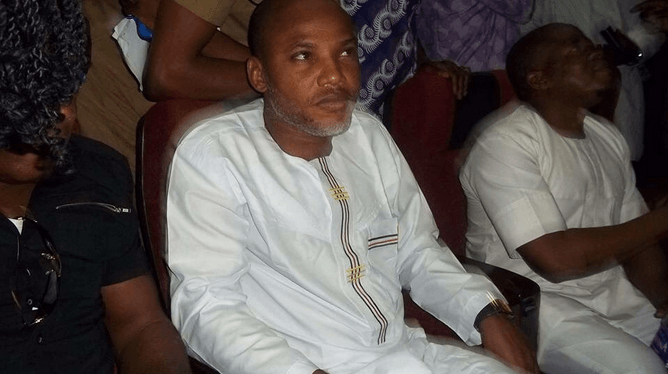 A Federal High Court in Abuja on Thursday dismissed the bail applications filed by leader of the Indigenous People of Biafra, Nnamdi Kanu, and three others with whom he is being prosecuted by the Federal Government for offences including treasonable felony and an act preparatory to act of terrorism.

Justice Binta Nyako, ruling on the applications filed by the four defendants, held that they were not deserving as most of the charges preferred against them were “ordinarily not bailable”.

Earlier, Justice John Tsoho, who was handling the case before Kanu accused him of bias, had earlier refused to grant bail to the accused persons.

The case was transferred to Justice Nyako on the account of Kanu’s allegation and all the accused were re-arraigned before the judge on November 8.

The lawyers to the four accused persons subsequently argued their clients’ bail application on November 17.

‎Ruling on Thursday, Justice Nyako held that she had no reason to “deviate” from the earlier “findings” Justice Tsoho, who had earlier refused to grant bail to the accused before Kanu accused him of bias and the case was later re-assigned to Justice Nyako.

Justice Nyako ruled on Thursday that though the case started de novo (afresh) before her, there were no new facts and circumstances that could warrant her to grant bail to the accused as the charges preferred against them were “serious offences”.

She said as alternative to granting bail to the defendants, she prefer to order accelerated hearing of the case.

Kanu’s co-accused who were denied bail on Thursday were the National Coordinator of IPOB member, Mr. Chidiebere Onwudiwe, Benjamin Madubugwu and David Nwawuisi.

They were, in the 11 counts, including treasonable felony, managing an unlawful society, publication of defamatory matter, illegal possession of firearms and improper importation of goods.

Onwudiwe was specifically accused in one of the counts of an act preparatory to an act of terrorism.

All the counts were in connection with the accused persons’ alleged broadcasts on Radio Biafra and agitation for the secession from Nigeria, states in the South-East and South-South zones and other communities in Kogi and Benue states to constitute a  Republic of Biafra.