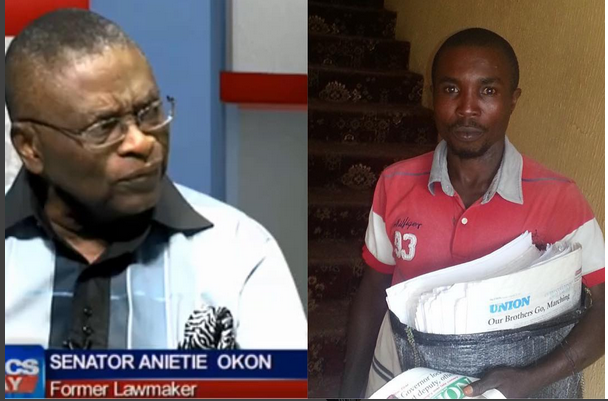 According to Etim, what he received from the Senator were hot slaps and accusation that he wanted to steal his wallet.

An embarrassed Etim who maintained his innocence, reported the matter to the state chapter of the Newspaper Distributors Association of Nigeria, who filed a civil suit against Aniete on his behalf.

“When he finished slapping me, he(Anietie) accused me of stealing his wallet. But God knows I am not a thief, I sell newspapers to take care of myself and my family. He didn’t even search me to see if I had his wallet on me or not.”

Delivering judgement in the suit today, Justice Winifred Effiong, ruled that the former Senator’s action against Etim was degrading and unacceptable and was against his Etim’s right to the dignity of his person as guaranteed by Section 34(1) of the 1999 Constitution of the Federal Republic of Nigeria, as well as the African Charter on human and people’s right.

Justice Effiong ordered the Senator to pay Etim N100,000 as damages and also N50,000 as cost for litigation. He also granted an order of perpetual injunction, restraining the former senator or his agents from further breaching of the applicant’s fundamental human rights.