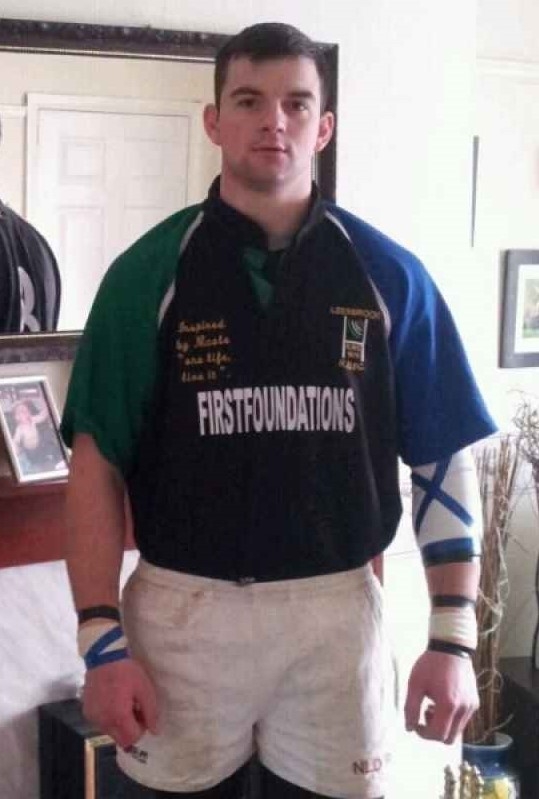 A rugby player has been locked up after kicking his opponent so hard in the face his gums and teeth were left’ concaved’.

John Scowby, 25, delivered the brutal blow to 35-year-old David Smith’s head after he scored a try during a match in Derby last year.

He then stood over his bloodied victim and said: “Take that,”

Mr Smith, who played for Paviors Rugby Club in Nottingham, was left so badly disfigured in the attack he feared his fiancée would no longer wish to marry him.

He now faces more than £10,000 of corrective surgery after his gums and teeth were ‘concaved’ in the shocking incident, the court was told.

In an emotional victim impact statement, Mr Smith told a judge the attack occurred on October 3, 2015, just months before his wedding.

He said it left him fearing he would lose his wife-to-be because he was ‘ugly’.

He also said both he and his life were now ‘unrecognizable’ and described his attacker as a ‘thug’ who ‘used rugby to disguise his nature’.

Derby Crown Court heard the horrific kick was delivered during an amateur match between the Paviors and Leesbrook Rugby Club in Spondon.

Earlier in the match, Mr Smith had scored a try for his team at Asterdale Sports Centre.

But he ended up on his hands and knees on the pitch during the second half after being tackled, the court heard.

Sonal Ahya, prosecuting, said: “Without warning or provocation, the defendant kicked him in the mouth saying ‘take that’.

“The kick was so forceful it knocked his head back and left him in excruciating pain.

“One of his front teeth dropped out, there was blood everywhere, his gums and teeth were concaved.”

Miss Ahya said at the end of the match, Mr Smith challenged Scowby about the assault.

She said the defendant, who was captaining Leesbrook, replied: “I owed you.”

The prosecutor added that the corrective surgery Mr Smith has had so far – and will require in the future – costs ‘in the region of £10,000’.

Scowby, of Spondon, was arrested and initially told police the incident was ‘an accident’.

However, he later pleaded guilty to the unprovoked attack.

As he read his impact statement, Mr Smith, of Nottingham, took out a plate in his mouth to show the judge how he now looks.

He told the court the on-pitch attack by Scowby forced him give up playing his beloved sport and going to the gym.

He also said that bone would need to be removed from his hip to be put in his mouth to try to straighten it.

“Everyone now associates me with my disfigured face and not the good player that I was,” he said.

“This happened on October 3rd, my mother’s birthday, and from now on I will know it as the worst day of my life.

“It happened months before my wedding and I would say to my fiancée, ‘Do you still want to marry me?’, because I felt so ugly.

“During one dentist appointment I had six needles stuck in my face. One, into the roof of my mouth, was so painful, I thought was going to go into my brain.

“My gums had to be sliced open and my face was pulled and popped back into shape.

“My life is now unrecognizable since this attack and, in my eyes, this man is a thug using rugby to disguise his nature.”

Alwyn Jones, defending Scowby, said his client had played rugby ‘to a very high level’ and had ‘no propensity for violence’.

Mr Jones said: “It was a moment of madness and using such force was completely out of character.”

Sentencing Scowby, Judge Adrian Redgrave said: “The fact that this attack took place on the rugby pitch cannot be used as an excuse.

“It was a deliberate and forceful kick to the face and Mr Smith has gone through a number of corrective surgery procedures since.

“He will need bone taken from his hip to be put into his mouth as part of his ongoing recuperation.”

Speaking after the sentencing, Andrew Brown, the chairman of Leesbrook Rugby Club, said Scowby had been banned from playing rugby after the incident was reported.

He said: “The club does not condone John’s actions on the field of play.

“No-one but John knows why he did what he did, but he is a genuinely lovely bloke who, I believe, acted totally out of character on that day.”

No Plan to Arrest Onnoghen – Presidency