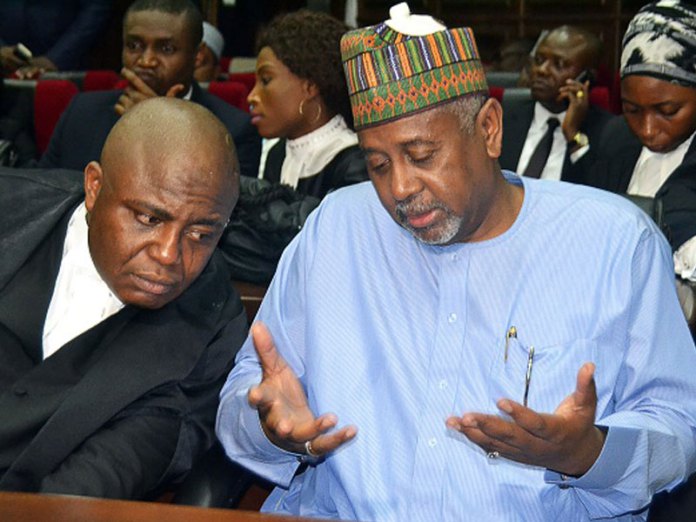 A Senior Advocate of Nigeria (SAN), Mr. Ahmed Raji, and counsel to the detained former National Security Adviser (NSA), Colonel Mohammed Sambo Dasuki (rtd), has taken the federal government to task on the purported offer granted Dasuki to allow him travel to Sokoto to attend the burial of his father, the 18th Sultan of Sokoto Alhaji Ibrahim Dasuki, who was buried on Tuesday.

The counsel who spoke with the judiciary reporters at the FCT High Court in Abuja, said the purported offer was doubtful because none of his lawyers was contacted on the issue.

He said: “As his counsel, we are not aware of that offer. Our client has not told us anything of that nature. We would have expected that if such gesture was going to be made to him, we as his counsel should have been involved so that we can advise him properly. As I am speaking to you, I am hearing of this for the first time.”

Raji said there was no basis for the continued detention of Dasuki by government having being granted bail by three different high courts in Abuja in the charges against him as well as the order of the ECOWAS court for his unconditional release in the case for the enforcement of his fundamental rights to freedom of liberty.

He said: “Dasuki has been granted three bails and one outright judgment for his release by the ECOWAS Court which is binding in honour on Nigeria”

The lawyer appealed to the federal government to set a good example by according respect to the rule of law and the principle of fairness and natural justice by ensuring the immediate release of the ex-NSA in compliance with various court orders.

Meanwhile, the trial of former NSA on the alleged arms deals filed against him by the federal government at the FCT high court has been adjourned to December
The trial was cancelled at the instance of lawyers from the prosecution and defence who jointly agreed that the mood was not proper for the trial of the ex-NSA whose father and the 18th Sultan of Sokoto, Alhaji Dasuki, was just buried on Tuesday in Sokoto.

Dasuki was not brought before the court for undisclosed reasons but his counsel, Raji, told the judiciary reporters that the former NSA was still mourning the sudden passage of his father.

The counsel hinted that although the matter was not officially mentioned before Justice Baba Yusuf who was billed to conduct the trial, all lawyers involved in the matter felt that the period was not good for the trial and hence their joint agreement for an adjournment till December 7

NBA 2020 Election: ECNBA Bars Presidential Candidates from Participating in ‘The...