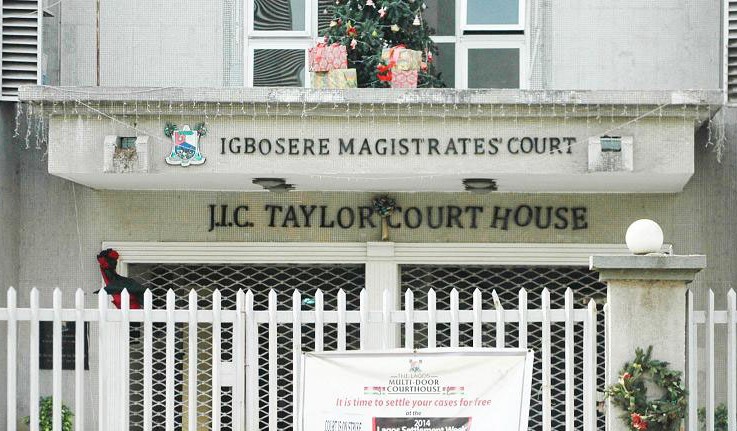 A mild drama occurred yesterday at the Lagos State Magistrate Court sitting in Igbosere as a defendant Avekpon Benard 18, who was standing trial for conduct likely to cause breach of peace alongside 22 others excreted in the dock.

The funny incident occurred while the court registrar was reading the three count charge of conspiracy, breach of public peace and unlawful possession of harmful objects to Benard and other defendants in the case.

According to the defendant, he had told the investigating police officer, who brought them to court, just  before the court started sitting that he was pressed and wanted to use the toilet but the policeman refused.

The investigating police officer had told the defendant that he cannot leave the other defendants unattended to.

Just as the court commenced proceedings, Benard who was sweating profusely and obviously couldn’t hold himself excreted in side the court which was immediately filled with a foul smell.

When Magistrate Mrs A. O Ogunbowale inquired about the foul smell, the defendant said he has excreted, so he was taken outside the court.

ALSO READ   Attend Webinar: 'Registrable Instruments and the Challenges at the Land Registry'

The police alleged that the defendants conspired with others who are still at large to commit the alleged offence.

The police prosecutor, Sergeant Ajaga Agboko, had told the that the incident took place on September 17, at about 3.30 p.m at Otodo Gbame Community in Eti-Osa Local government area of Lagos State.

Agboko said that the defendants conducted themselves in a manner likely to cause breach of peace.

He alleged, “The defendants were found having in their possession fetish charms and other harmful objects without any lawful or reasonable excuse.

The prosecutor insisted that the offence are contrary to and punishable under Sections 409, 16f (D) and 133 (b) criminal laws of Lagos State 2011.

The defendants all pleaded not guilty to the charge.

Magistrate Mrs Ogunbowale granted the defendants bail in the sum of N50,000 each with one surety each in like sum.

She ordered that the sureties must be blood relations of the defendants ‎and that their addresses must be verified by the court registrar.

She then adjourned the case to October 6, for commencement of trial.