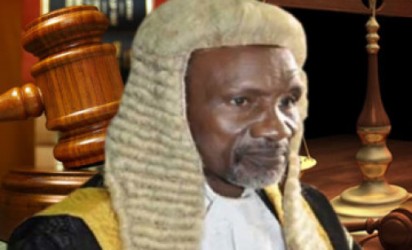 The Chief Justice of Nigeria, Justice Mahmud Mohammed, broke his silence on Monday on the raid on the houses and arrests of two Justices of the Supreme Court and other judges by the Department of State Services, describing the operations as regrettable.

Justice Mohammed who spoke on Monday at the valedictory court session held in honour of a retiring Justice of the Supreme Court, Justice Suleiman Galadima, said that the National Judicial Court would meet on Tuesday to take a position on the incident.

Mohammed commended the Nigerian Bar Association for the step that it had so far taken on the matter.

“My lords, invited guests, ladies and gentlemen, not to detract from this occasion, it is indeed very saddening and deeply regrettable, the distressing and unfortunate incident which occurred on Friday, October 7 and Saturday, October 8, 2016.

“However, I must ask all Nigerians to remain calm and prayerful, as emergency meeting of the National Judicial Council, which will take place tomorrow (Tuesday), will comprehensively look into the matter.

“Furthermore, I must express my sincere appreciation to the executive of the Nigerian Bar Association ably led by the President, Abubakar Mahmoud (SAN), and indeed all members of the legal profession for their prompt action and continued support.”

The DSS had, in what it called a sting operation, arrested Sylvester Ngwuta and Inyang Okoro, both of the Supreme Court; the suspended Presiding Justice of the Court of Appeal, Ilorin Division, Justice Mohammed Tsamiya; Justice Kabiru Auta of the Kano State High Court and Justice Adeniyi Ademola of the Federal High Court, Abuja.

Other arrested were a former Chief Judge of Enugu State, Justice I. A. Umezulike, and Muazu Pindiga of the Federal High Court, Gombe Division.