Home News Falana, Ozekhome, others disagree on arrest of judges 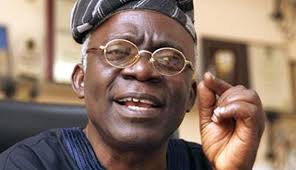 Reactions continued on Sunday to trail the weekend arrest of some Nigerian judges in their homes by operatives of the State Security Service, SSS.

While most of the voices have been in condemnation of the development, foremost rights activist and lawyer, Femi Falana, had a different view as he blamed it on alleged years of negligence by the National Judicial Council, NJC, to stamp out corruption among judges.

In a statement he issued from Lagos, Mr. Falana called for the release of the judges but demanded their prosecution by the Attorney General of the Federation.

“As the detained judges are presumed innocent until the contrary is proved by the state, they should be admitted to bail in self recognizance. At the same time, the office of the Attorney-General of the Federation should ensure that the suspects are arraigned in court without any further delay.

“However, it is a matter of grave concern that the legal profession has allowed the denigration of the hallowed temple of justice because of the misconduct of a few corrupt judges. For several years, judges who committed grave criminal offences were not prosecuted but merely retired by the authorities on the recommendation of the National Judicial Council.

“Although the National Judicial Council recently recommended the dismissal and prosecution of a judge for extorting the sum of N197 million from a litigant, the authorities had paid lip service to the menace of judicial corruption in the country.

“About two years ago, an anti graft agency found N2 billion in the account of a high court judge. As soon as the judge was invited for questioning, she reported and made a statement and was granted bail. But as she could not defend the lodgement in her bank account, she obtained an interlocutory injunction from one of the judges in the custody of the SSS.

“It is common knowledge that two Senior Advocates of Nigeria are standing trial in the Lagos high court for allegedly bribing a judge. Even though it takes two to tango, the judge has not been charged to court for allegedly receiving bribe,” said Mr. Falana.

Mike Ozekhome, a Senior Advocate, however described the attack as dangerous and against the very foundation of democracy.

He alleged that intimidation by the current administration started long before this attack and that the silence of Nigerians created the room for what he described as the increase in the abuse of democracy.

“It started with political opponents and opposition. Some of us cried out. Many gloated with éclat and a sense of victory at opponents’ horrific travails. Then, they moved against some very senior and well respected lawyers being rubbished. Some clapped. They said it was anti-corruption. We cried out. It extended quickly to the National Assembly, another different arm of government. Many hailed the Government as tough, no-nonsense and anti-corruption- inclined. Some of us warned.

“Now, the Judiciary, up to the very apex court of the land, the Supreme Court, has been targeted and is now being intimidated, humiliated and annexed,” he said.

Mr. Ozekhome warned that if the clampdown was allowed to continue, the media would be the next target of the SSS.

In the opinion of a U.S. based lawyer, Emanuel Ogebe, the action of the SSS represents what he described as the dictatorial style of President Muhammadu Buhari.

In a statement addressed to media practitioners in Nigeria, Mr. Ogebe said the attack on the judiciary is worse than any in the history of Nigeria’s dictatorship.

“Here is why the president goofed. In furtherance of the doctrine of separation of powers, the National Judicial Council is the body primarily charged with the discipline and appointment of judges involving violations of the Code of Conduct of judges in S.292(1) of the Constitution. This peer review ombudsman agency serves as a bulwark to arbitrary and vindictive attacks on judges from the executive or legislative by conducting internal self-cleansing.

“Indeed just the day before the raid on the judges, NJC had listed almost 70 judges upon whom disciplinary action had been taken in a 5 year period. At 5% of the approximate 1042 judges, this is more than the number of governors, ministers or legislators ever sanctioned for misconduct in the past 16 years of democracy combined,” said Mr. Ogebe.

He gave examples of alleged dictatorship by past administrations, adding that Mr. Buhari’s “style of dictatorship has always been worse” than that of other dictators in Nigeria.

“Firstly, not even in the dark days of the brutal dictator General Abacha, the butcher of Abuja, did anything of this sort happen. Abacha’s highest action against the judiciary when they granted his political rival for the presidency, MKO Abiola bail, was to appeal the decision and refuse to appoint new judges to hear the case.

“Similarly even President Obasanjo, also a former military dictator, only used a similar mechanism under the constitution by declining to forward names of certain judges recommended by the NJC to the Senate for confirmation. Obasanjo ultimately appointed judges to the bench.

“However Buhari’s current government’s action is worse compared to his prior record as a military dictator in the 80s. Buhari then retired many judges whom he felt did not give judgments against the ruling party. Furthermore he created special tribunals and rewarded judges who agreed to serve on these tribunals with promotions over and above those who didn’t,” Mr. Ogebe said.

The National Youth Council of Nigeria also condemned the attack and vowed to stage a nation-wide protest to register its concern.

In a statement signed by its President, Ikenga Ugochinyere, the council described the attack as shameful and grossly undemocratic.

“We totally condemn the arrests of these jurists as their arrests could have been done in civilized ways. Who says it is only under the cover of darkness that they can be arrested? Was the onslaught by that time of the night for an opportunity to do anything the Service will not want Nigerians to know about? Was it necessary to pull down the doors of the houses of non-violent judges to execute an arrest warrant?

“While we note that no one is above the law and that security agencies can arrest anyone who commits a crime, we wonder how such highly placed citizens who were not known to be violent could be arrested with a combined team of SSS and Police and in such a Gestapo style.”

The council called for an immediate release of the arrested judges and an end to all forms of attack on judges in Nigerians in general.

It asked the Nigerian Bar Association to order boycott of all courts of law for the next 48 hours as a demonstration of its dissatisfaction of the action of the SSS.

The council further said it will organise protests across the nation, where the NBA fails to exercise a show of dissatisfaction.

The Socio-Economic Rights and Accountability Project, SERAP, asked President Buhari to order the immediate release of judges arrested by the office the State Security Service or face global legal action.

In a letter dated October, 9 SERAP asked the president to order the release of the judges and an end to what it called the undue intimidation of the Judiciary and Nigerians in general by the SSS.

“If following the receipt and/or publication of this letter, your government fails or refuses to immediately and unconditionally release the judges as requested, SERAP would promptly consider appropriate legal options nationally and internationally to ensure the full and effective implementation of our requests,” it said.

When Law Professors ‘Re-Kant’ – On Heroes Proving Themselves Ordinary