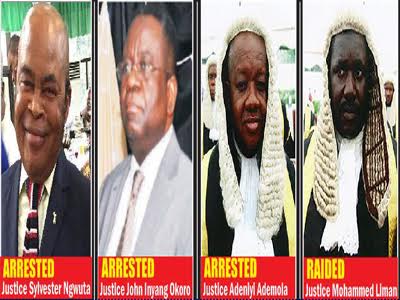 The Federal Government, yesterday, shunned the National Judiciary Council, NJC, and pressed ahead with its decision to bring the seven suspected corrupt judges to justice. The seven are among the 15 already identified by the Department of State Services, DSS, and the Economic and Financial Crimes Commission, EFCC, but the other eight are yet to be named and invited for questioning.

The NJC, which claimed to have omnibus powers over both criminal and administrative matters relating to judges in Nigeria, last week, disregarded the Presidency’s directive to suspend the suspected corrupt judicial officers from duty, pending the trial and disposal of the criminal allegations levelled against them.

Rather than comply with Presidency’s order, the NJC slammed the DSS for daring to search the homes of the judges in the night and making away with huge cash in local and foreign currencies. Although none of the suspects denied keeping the huge cash in their homes, the NJC was silent on the propriety of the discovery of the money in the homes of the judges but disparaged the DSS for the raid, which it claimed was intended to cow the judges from doing their jobs. In a brazen move to get at both the NJC and the suspects, who have tried to blame key ministers in Buhari’s administration for their ordeal, the Federal Government, last night, formally approved the prosecution of the suspects with immediate effect.

A top Presidency official confirmed that the Office of the Attorney General of the Federation, AGF, had approved the immediate prosecution of the suspects so as not to give the erroneous impression that government was promoting corruption. The top source said the trial of the suspects would be carried out in phases and handled by the National Prosecution Council, which was recently inaugurated.

The source said the refusal of the NJC to suspend the suspected judges was interpreted as a ‘slap’ on the Presidency and that no country would allow a few people to constitute themselves into a cabal that is ‘above the law’. Asked to disclose the nature of the charges to be preferred against the judges, the official said: “The charges are generally for corruption, with an isolated case of illegal possession of firearms to be pressed against one of the judges.”

‘The firearms were recovered from the home of one of the suspects by the DSS during the nocturnal raid on October 7, a development that had sparked national outrage.’ Giving further insight into the trial, the source hinted: “I can tell you that the National Prosecution Council will lead the prosecution of the suspects, while the Director of Public Prosecution in the Federal Ministry of Justice will coordinate the team.

“The charges were cleared from the OHAGF only yesterday and the suspects are certainly going to be charged to court any moment from now. The Federal Government is not deterred by the refusal of the NJC to suspend the suspects from office.” Efforts to speak with the Attorney General of the Federation, Mr. Abubakar Malami, a Senior Advocate of Nigeria, proved abortive, as he was said to be outside Nigeria. None of his officials claimed knowledge of the approval of the charges against the suspected judges.

It will be recalled that the DSS had launched a sting operation in the homes of the judges on the night of October 7, 2016, recovering local and foreign currencies worth N360 million. Two of the judges are from the Supreme Court, while the rest sit in Federal and State High Courts. While Justice John Inyang Okoro of the Supreme Court claimed on Tuesday that $38,000 found in his home was his estacode, he did not say how the over N3 million cash was left in his home and not the bank.

On the other hand, Justices Ademola Adeniyi and Nnamdi Dimgba have blamed their ordeal in the hands of the DSS on the AGF over certain court verdicts they claimed they gave against him in the past. Nonetheless, the allegations against Malami were not mentioned to anyone until the raids on their homes by the DSS.