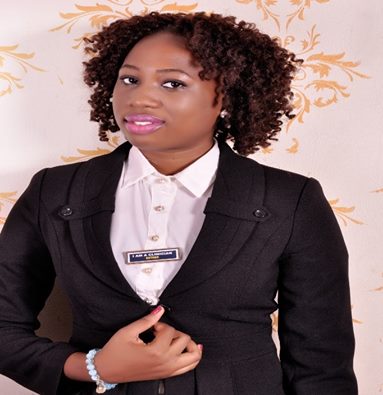 The Council of Legal Education on 14th October, released the result of the August/September 2016 Bar Part II exam. Out of the 5,517 candidates who sat for the bar final exam, a total of 4,178 passed the bar exam and would be called to bar during the  November 29/30 call to bar ceremony. 24 out of the successful law students graduated with a first class. a remarkable feat in the dreaded Bar Final Exam. In this interview, one of the first class graduates Miss Esther Maudlyn Johnson-Chu, tells DNL Partners how she achieved this feat:

Can we meet you?

My name is Esther Maudlyn Johnson-Chu. I am from Ogale Town in Eleme Local Government of Rivers State, the second of three children. I studied Law at the University of Abuja, Nigeria. Also, I am a recent graduate of the Nigerian Law School, Lagos Campus currently awaiting NYSC and ready to take on the world.

Has it always been your dream to be a lawyer?

Not really. I always thought I was going to be a doctor and actually started studying sciences. Along the line, the plans changed.

Law, to me, is basically a means to an end. I want to make a contribution to the world and by God’s grace, being a lawyer will help me do that.

What made you change the plan?

Honestly, when I decided to move from the sciences, I initially tilted towards Accounting because Mathematics  has always been (still is) my favorite subject. However, by Divine Guidance, I decided to go for Law instead.

Did you set out to graduate from Law school with a first class?

Yes!!! I really wanted it desperately. But I knew I couldn’t do it on my own. So I made it my number 1 prayer point for months.

Graduating with a first class from Law school requires so much hard work. At some point, most students just wish for a pass and to just be called to bar. How was it for you?

To be honest, I don’t think I worked as hard as most people would expect. I’ve never been good at reading at night so I barely did that. Mostly, I tried to make use of daytime carefully. I was able to cover the course outline back to back multiple times but there will always be things you just don’t know. But a pass for me just wasn’t an option. I once overhead a fellow student say ‘If I fail, let me fail with 2.1’. That was my motto.

Did you consider yourself a genius or was it hard work?

Neither. It was the Grace of God.

What was the greatest sacrifice, commitment or extra effort you made in Law School?

Like I said, I wasn’t a night reader. Therefore, my days had to be focused on covering all I possibly could. After classes, I couldn’t rest for a few minutes like most other people. Once I change, it’s off to the reading room to go over the following day’s topics and tasks.

Did you take any major decision(s) concerning your academics when you got to Law school that helped you?

Well, maybe not consciously. But in the University, I would only start reading seriously about a month or so to exams. For Law School, that would never have worked. So I started reading from the first week of lectures even though there was a lot I could not understand. That helped a lot.

You know you have become a model for up coming law students. What was your typical day like at the Law school?

Well, after saying my prayers, depending on how early I was able to wake up, I may go through the topic for the day on my phone (soft copy materials) before preparing for school. I try to go early so I don’t miss the thumb printing (attendance). I also tried not to miss lectures and to pay attention even when tired or hungry or… bored.

After classes, I may have lunch (depending on whether I ate earlier) then I start working on the task for the following day personally. Sometimes, I use this time to go over some things I may not have understood in class. Soon after that, it’s time for group meeting which I always tried to attend. After that, I may get dinner or continue reading till I get sleepy.

Saturdays are a little different – more time to read. And on Sundays, there was church. But basically, it was eat-read-pray-sleep for me.

Many see Law as a complex, and unnecessarily voluminous course  what is your take on this?

Well, I agree to an extent. I think the study of Law is unnecessarily onerous. This might be to perpetuate the idea of the noble profession but there’s a lot that we learn that’s not actually in practice. As well as a lot in practice that no one prepares you for. We could do with a review but, all in all, the Study and Practice of Law is worth the sacrifice and effort.

Some people also think that cramming was one of the major pass trick in Law school. Do you agree?

Honestly, to an extent, you have to cram details like time, numbers, facts, document lists, cases etc

But the substance of the Law can never be learned by cramming. You have to know it, own it, become it and apply it.

What are your future plans?

Right now, the next thing for me is the Youth Service year. I hope to use that time to develop myself as a person and professionally as well as contribute positively to the Nation.

Generally, over the next few years, I intend to familiarize myself with the actual practice of Law. I would like to earn a Masters in Law by God’s Grace. I want to learn and develop. Subsequently, I may carve a niche in particular.

Most importantly, I want to serve God and use what He has blessed me with to reach out to others.

Which aspect of legal practice do you find interesting?

Corporate Law has always fascinated me. I like to think of it as the Gentleman’s game where intelligence and foresight is more relevant.

What would you advise other law students entering law school?