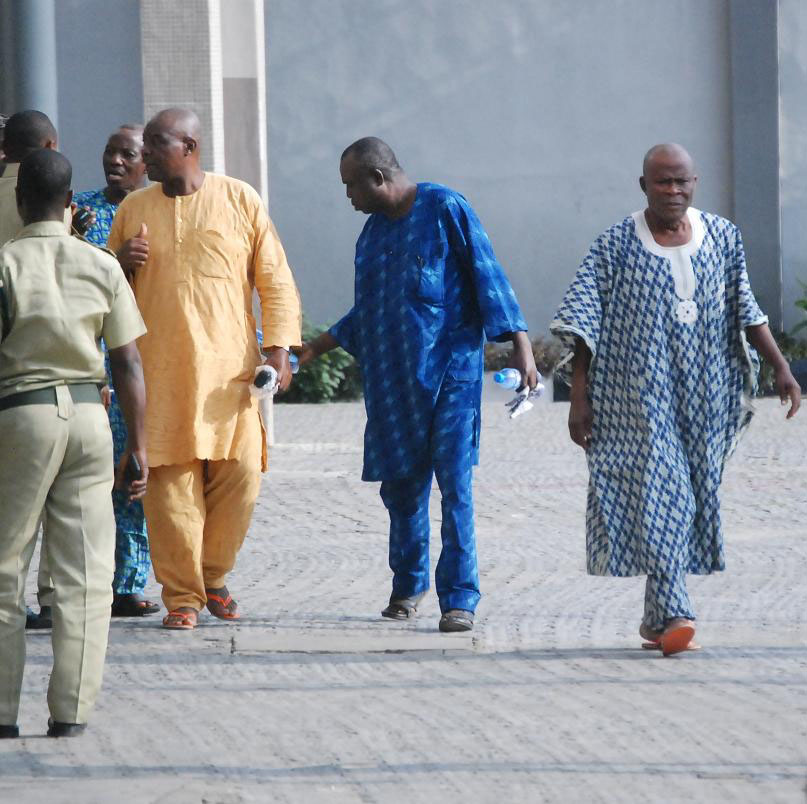 The next 18 months are  not going to be the best of times for four princes from the Oluwa royal family of Lagos. They will be behind bars at the Kirikiri prisons.

Three weeks ago, Chief Magistrate A. A. Adesanya of an Ogba  Magistrate’s Court, Ikeja, found them guilty of conspiracy and forgery preferred against them by the police.

According to the magistrate, the prosecution proved its case beyond doubt.

Handing down the sentence, he said: “On Count one, the four defendants are sentenced to eight months imprisonment.

“On Count two, the four defendants are hereby sentenced to one year and six months imprisonment. Each of the counts are to run concurrently. That is the judgment of the court”, Adesanya held.

Consequently, he jailed them for one year and six months.

The four princes from Oluwa Chieftaincy Family of Apapa, Abayomi Shamsideen Oluwa (62), Ismaila Abayomi Oluwa (67), Tajudeen Ototo Oluwa (58) and Muse Adegboyega Oluwa (56) would never have dreamt of ever becoming prisoners in their life, not even when they were arraigned on June 30, 2014, by the Lagos State Commissioner of Police for conspiracy, forgery and threat to life. Nothing prepared them for the new life they are living now.

Police prosecutor, Inspector George Nwosu during the trial, had told the court that the defendants, sometimes in March, 2013 at about 12.30 p.m., at the high court of Lagos, conspired amongst themselves, forged the official stamp of the High Court of Lagos and signature of Principal Registrar of the court and smuggled it into a public notice, and thereby committed an offence punishable under Section 363(2)(b) of the Criminal Laws of Lagos State 2011.

The defendants also allegedly, on November, 2013, at about 0.33 p.m. at Nwokolo Street Apapa, Lagos, threatened the life of one Chief Mukaila Lawal Oluwa, the Oluwa of Lagos and Apapa, with cutlasses and other dangerous weapons and thereby committed an offence punishable under section 56 of the Criminal Laws of Lagos State 2011.

Delivering judgement in the case, No. Mik/V/13A/2014, Magistrate Adesanya held that the prosecution has established a mala facie case against them, going by their confessional statements made to the police, coupled with the evidence provided by the Court Registrar whose signature was forged. He held that all the evidences together weighed heavily against them.

The court however absolved the defendants of the charge of threat to the life of Chef Mukaila Lawal Oluwa, the complainant. The court held that the prosecution has not been able to prove the charge because of its failure to produce the driver whom the Chief claimed to be present at the time of alleged threat to butress evidence.

“The driver who could have corroborated or been a vital and crucial witness for the prosecution was never called. Quite frankly, this court holds that the prosecution has not proved the alleged threat to life to any logical and of evidential conclusion”, the court held.

The Chief Magistrate however held that the defendants, in their confessional statements which were tendered and marked as exhibits during the trial proceedings, each of them owned to be party to the making of the offending public notice and newspaper’s publication.

“This court thus holds that all the Defendant’s oral and documentary evidence so far adduced to, the consequences of these multiple contradictions are clear. They succeeded to destroy the Defendants’ case as presented. They completely knocked the bottom out of their case. On the other hand they succeeded in making and keeping the case of the prosecution solid, fortified and monolithic. See also O.K. Mogaji vs. Cadbury Nigeria Ltd (1985) 2NWLR (Pt. 7) 393.”, the court further held.

“Can it be said that the content of the newspaper (Punch Newspaper) has been destroyed? With all human and logical mathematical calculations, same would not have been accomplished. To my mind, such would only have been destroyed if not … but for sensical and logistic approach and equally published a rejoinder, the disclaimer, or any, in obedience to the order of the High Court, disassociating, exonerating, and or public apology of some sorts to the public, to disregard and or exonerate the name of the undersigned persons in the public notice or adverts … None of the above so far during trial proceedings was tendered before this honourable court.

“Thus the lie, misconception and misrepresentation of my Lady’s ruling still lingers in the mind of the readers”, he said.

“Suffice to state, to my mind, conscience and the Law the Order of Court is still yet to be obeyted and the offence of forgery still remains alive in countless and numerous hands of the public whom had bought and still have the Punch Newspaper dated the 12th day of March, 2013.”

Justice Harrison had earlier ruled: “The court observes that both parties appear to have misconceived the scope of the order of interlocutory injunction granted by the court on the 21st day of February, 2013. The above resulted in the purported certified true cope of the public notice attached as Exhibit AR3 to the 1st defendants application dated 18/3/2013, which is not a document originating from the court but which bears the signature and name of the court registrar Mrs. A. Akinola and was purportedly certified by H.S. Adeniyi Principal Registrar an official of the court. From a closer look it appears that a portion of a regular and valid order of court was super-imposed by whatever electronic means on the said public notice which was alleged to be issued under the hand and seal of the presiding judge.