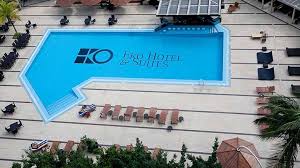 Nigerian-Lebanese billionaire hotelier and businessman, Gilbert Chagoury, has filed a legal action on Friday against the United States government after being denied entry into the country due to alleged terrorist links.

The owner of Eko Hotels in Lagos Nigeria, relying on the recently enacted Judicial Redress Act, claimed violations under the Privacy Act contending that the US agencies have caused great damage to his reputation and property, and denied his Constitutional right to due process.

Signed into law by Barack Obama in February 2016, The Judicial Redress Act extends those privacy protections established in the Privacy Act to citizens of other countries. It provides recourse to foreign nationals to sue the United States for unlawful disclosure of personal information  through the original terms of the Privacy Act. This recourse was initially available to US citizens only.

Chagoury, who was born in Nigeria and holding a dual citizenship is the first such person bringing a suit under the Judicial Redress Act.

“This was a deliberate, outrageous and unlawful leak of information and more importantly, misinformation about Gilbert Chagoury. It violated the Privacy Act, the Judicial Redress Act, and his right to due process. He is suing to recover his reputation and the property and business interests that have been unjustly harmed by this irresponsible action,” said Stewart Baker of Steptoe and Johnson, LLP, attorney for Mr. Chagoury.

“Pursuant to 5 U.S.C. § 552a(b), the FBI, DOJ, NCTC, State Department, DHS, and CBP may not “disclose any record which is contained in a system of records by any means of communication to any person, or to another agency” unless certain exceptions apply. At no point in time did Mr. Chagoury provide the Government with either verbal or written consent to disclose any information or misinformation concerning him to third parties.” His lawyers said.

Chagoury was reportedly denied the visa on grounds that he gave financial support to a Lebanese politician, Michael Aoun, whose party is in political coalition with Hezbollah, an organization the US has tagged a terrorist group.

In 2013 an FBI intelligence report claimed Chagoury sent funds to Aoun, who then transferred the money to Hezbollah. The report also indicated that the information is from an unverified source.

The Hezbollah terror tag stemmed from the double bombings in 1983, killing 63 at the U.S. embassy in Beirut and 241 at a Marine barracks later that year. The defendants in the suit are the FBI, the Department of Justice, the National Counter Terrorism Center, the Department of State, the Department of Homeland Security, the Central Intelligence Agency, and US Customs and Border Protection.

The lawyers said the intentional leak to the media of false information about Mr. Chagoury was a repeat of a similar unlawful incident from 2010, when he was wrongly placed on the no-fly list, without notice or opportunity to be heard, and his placement on the no-fly list was leaked to the media.

“When challenged with facts, the U.S. Government reversed that decision, formally apologized and allowed him to travel to the United States, which he did multiple times without incident until recently.

Mr. Chagoury was born in 1946 in Nigeria to Lebanese parents and got his education at the Collège des Frères in Lebanon. He co-founded the Chagoury Group with his younger brother Ronald Chagoury in 1971.

Mr. Chagoury is married with 4 children with the family holding an estimated wealth of $4.2 billion.