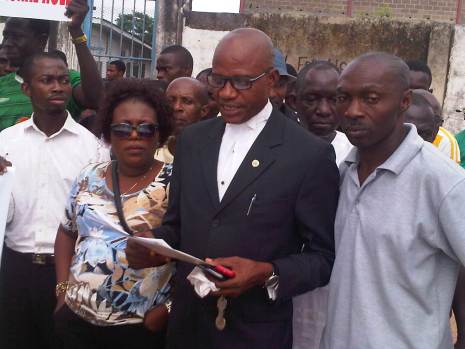 A coalition of civil society groups on Wednesday staged a peaceful rally in Ikeja, Lagos, in condemnation of the recent arrest of judges across Nigeria.

The Lagos protest occurs two days after a similar one in Abuja.

The Lagos rally organized under the banner of Civil Society Coalition for Good Governance also had in attendance groups like Activist for Good Governance, Women Progressive in Action, Human Rights Defenders Group and the Concerned Forum.

Speaking on behalf of the coalition, a lawyer, Adeola Samuel, condemned the manner the judges were arrested.

“It is highly condemnable, the way the executive arm of government has unleashed men of the Department of State Service on judges in the middle of the night. who now break into the homes to conduct illegal searches and make arrests without following due process and allowing the rule of law take it course,” he said.

The seven senior judges were arrested on October 7 after officials of the State Security Service, SSS, raided their homes.

Accused of corruption, they are yet to be charged to court. However, the two Supreme Court judges among the seven have already stepped down pending the conclusion of investigation.

Mr. Adeola in his address to the media noted the coalition’s support in government’s fight against corruption but advised that due process be followed else the country is plunged into a dictatorship.

He alleged that the manner of arrest was a ploy to arm-twist the judiciary.

He said due process should be followed when judges are accused of corruption.