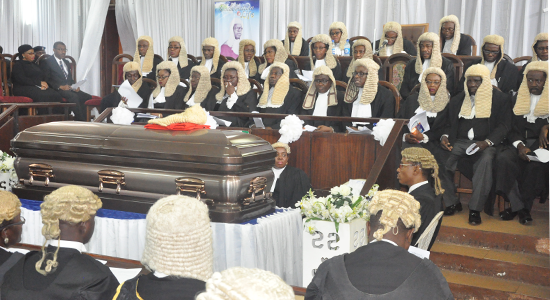 In this report, STEPHEN UBIMAGO writes that instead of the passing and funeral of the former Chief Judge of old Bendel State descending into an assemblage of mournful faces, it rather turned into a celebration of a life well spent in the service of God and humanity……
If eulogies could wake the dead, the late Hon. Justice Josiah Ajasa Poutinkumo Oki, OON, would probably have woken up from his eternal slumber given the loud panegyrics that were repeated over and again on the occasion of his interment.

The funeral rites to mark his passage were laden with torrents of dirge that flowed freely, especially from those who’d been directly or remotely affected by his exemplary life – one that had been defined by unyielding moral rectitude, probity in the bench, circumspection at all time and philanthropy.

To say that the late Hon. Justice Oki wielded as much influence in death as in his lifetime would be putting the narrative mildly.

Saturday, 16th of July, arguably witnessed the largest gathering in recent times in the pristine and serene town of Patani, Delta State, as friends, eminent jurists, politicians, businessmen and sympathizers from all walks of life, trooped to the country home of an illustrious son of the town, legal luminary, the Beribo of Kabowei Kingdom and retired Chief Judge of old Bendel State, to pay their last respect to the fallen hero.

The funeral rites commenced on 13th July in Benin City with a valedictory court session held at the High Court of Justice, Sapele Road in his honour.

What ordinarily could have passed as a mere court session was to snowball into a carnival of sorts, as friends, relatives, legal titans and professional colleagues from both Edo and Delta State , swarmed the court premises and filled it to capacity in a bid to catch a glimpse of the quintessential jurist, who during his tenure as Chief Judge of Bendel State, dilated the frontiers of liberty, equity and justice.

Judicial workers in Edo State even defied all odds to ensure they were present at the special court session organised in honour of the man, whom many described as the ‘’epitome of jurisprudence.’’

The roll call of eminent personalities at the court session was endless. In attendance was the Governor of Edo State, Comrade Adams Oshiomhole, who flew in that morning just in time to make it to the court.

The Chief Judge of Edo State, Hon. Justice C.O. Idahosa, in a special tribute said, “For the great legal icon in whose honour we are here gathered, he imbibed and exhibited the principles of truth and truthfulness, justness and justice, firmness and fairness.

“Indeed, His Lordship’s contributions to the development of law and of a viable judiciary in the defunct Bendel State in particular are so immense. The finality of death cannot draw a curtain on his contributions.”

To the Honourable Attorney General and Commissioner for Justice, Delta State, Mr. Charles Ajuyah (SAN), the late Hon. Justice J.A.P Oki can best be described as an ‘’illustrious, erudite and emblematic judge who made significant contributions in his very many illuminating judgments.”

He charged his colleagues to uphold the values espoused by the late Justice Oki by eschewing corruption in all its ramifications and keeping away from compromising gatherings.

To the family of the late legal icon, Ajuyah admonished: “You are to hold his good name in trust for future generations…if you cannot improve on it, keep it as he has left it.”

Also in his tribute, the immediate past President of the NBA, Austin Alegeh (SAN), called on his colleagues across the country to imbibe the values of integrity and incorruptibility which the late Hon. Justice Oki typified.

The last son of the late jurist, Mr. Paul Oki, a lawyer, has this to say about his father: “My father set very high standards for his children, fellow judges, legal practitioners and indeed anybody he came in contact with. He was indeed a rare gem.”

With countless titles, sundry awards and plaques dotting his expansive living room in Benin City to show for his efforts, the late J.A.P Oki indeed lived a life of service to the nation.

His ilk is rare these days, especially with the deluge of scandals rocking the noble profession in recent time.

This perhaps informed the rally that his funeral service at St. Mathew’s Anglican Cathedral, Patani morphed into.

Rt. Rev. Edafe Benjamin Emamezi, Bishop of Western Izon Diocese who officiated at the service along with four eminent Bishops, tasked worshipers to take a cue from the legacies of the late Justice Oki by “serving God and humanity in truth and honesty.”

At the Patani Local Government headquarters, venue of the reception, friends, well-wishers, professional bodies, cultural groups, comedians, musicians and dancers, dotting colourful apparels, all jostled for space to be part of the glamorous event to mark the funeral of a legal titan who bestrode the legal firmament like a colossus.

The late Hon. Justice J.A.P Oki was born in the year 1925 at Emede in Isoko LGA. He attended the famous Dennis Memorial Grammar School, Onitsha.

He had a brilliant career in the public service which saw him become Chief Registrar of Court of Midwestern State (1968); Judge of the High Court (1971); Attorney General and Commissioner of Justice, Bendel State, (1975); Chairman, Bendel State 1983 Gubernatorial Election Tribunal; and Chief Judge of Bendel State (1985).

A devout Christian and devoted family man, the late Justice Oki is survived by his wife of 55 years, Mrs. Edith A. Oki, 6 children and 14 grandchildren.

The legacies left behind by the late Hon. Justice J.A.P Oki shall continue to endure the hazards of time. His demise is indeed the end of an era.