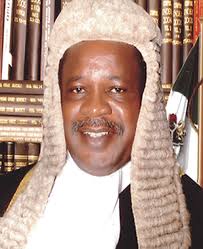 Ibrahim Auta, chief judge of the federal high court, Abuja, has charged judges of the court to take decisions that they can defend before God.

Auta gave the charge on Monday while declaring open the 2016/2017 legal year of the federal high court.

He described the work of a judge as the highest position of trust and confidence that God can give to any man.

“You do not have to know all the law, but your decision must be one that even the party, who lost would have cause to appreciate your intellect, scholarship and call-to-duty,” he said.

“The work of a judge the world over is not easy; it is even more difficult in our society where cases are prosecuted on the pages of newspapers.

“However, the work of a judge is the highest position of trust and confidence that God can give to any human being, trust that you sit to judge your fellow human beings and their activities.

“I therefore urge my brother judges to search their conscience before taking any judicial decision. You must take decisions that you can defend before God.”

He blamed the numerous controversies that confronted the court, leading to misrepresentation and misinterpretation, on lawyers who misled judges.

Auta said it was an offence for any lawyer to rush to another court of coordinate jurisdiction in a different division to file a case which was pending in another court.

He called on the Nigerian Bar Association (NBA) to sanction any lawyer found misleading judges in this way, saying they were causing confusion in the judiciary.

“While a case is pending in one court, a lawyer will rush to another court of coordinate jurisdiction and file the same case without the knowledge of the judges,” he said.

“We will take this very seriously and even discuss it during our conference because it is an offence and it is not good for the administration of criminal justice.’’

According to him, if the trend was continued, the issue of bloated cause lists would be a thing of the past.

While commending the judges, the judge added that the court was determined to ensure proper welfare of the judges to enhance their performance.

To this effect, he said that all new judges had undergone detailed medical assessment to make them more aware of their medical health conditions.