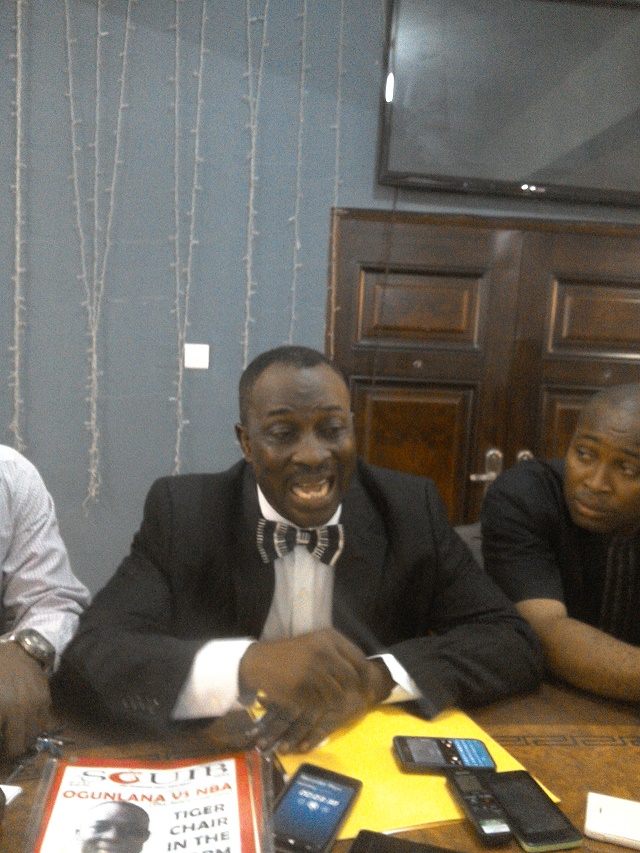 The leadership feud rocking the Ikeja branch of the NBA started sometime in June  when the first election held by the branch which produced Mr. Adesina Ogunlana as the Chairman was annulled by the National Leadership of the Association citing noncompliance with the Uniform Bye Laws of the NBA in the electoral process. A subsequent election was conducted and Mr. Dele Ologe emerged as the Chairman of the Branch in an election that was unopposed.

In an effort to present a balanced story DNL Partners Legal and Style in this series  presents the two sides of the interviews with the two persons claiming right to the office of the Chairman of the Tiger Branch.

Below  is Mr. Adesina Ogunlana’s side of the Story:

My name is Adesina Ogunlana, I am chairman NBA, Ikeja. What you are seeing is very unusual we have called for our conference meeting today at 1 pm when I did some members jumped out and were claiming that I cannot preside, I told them that we are all lawyers that they should go back to their seat and raise their objections and I will entertain them.

They refused and tried to assault me, other members challenged them. They wanted to take the microphone from me but I refused. It was clear that they brought the policemen that invited me come, I said no, I am not coming, this is my jurisdiction and that I am dealing with you on the level of Commissioner of Police whom I have reported the matter to last week.

They continued to be unruly and I decided to go on with the meeting. It was a special occasion that demanded special reaction. As it started, the executive in their wisdom or un-wisdom decided to abandon the high table. There was nothing like quorum of executive, so I called my PRO to act as secretary, for the purpose of this meeting and he did, I am permitted by the constitution to do so and I made nominations for the conference planning committee, because we are having our annual conference in August and the committee has been set up.

What actually happened is that the branch conducted an election including the office of the chairman, I participated in that election and I won, I won handsomely. There are three candidates, I scored 48 percent of votes, and the other 2 candidates managed 52 percent of total votes cast. I won and I was declared winner on Election Day and I was sworn in.

On the 14th of June at the AGM in Benin, before we did the election the national body called the election Monitoring Group and tried to dictate to us in Ikeja, he wrote chairman of the branch, Yinka Farounbi that he should tell the local Electoral Committee to disqualify me and Gloria Uwaise from participating in the election by virtue of Section 6 (3) of the Unified Bye Law of the NBA. The electoral body refused on the grounds that Section 15(5) of the constitution states that the determinability of people qualified for election lies in the local electoral committee and that nobody can dictate to them.

In their own wisdom or un-wisdom they decided to prequalify me and Gloria Uwaise. I won the election, after that I went to Benin for NEC meeting before I got there I was recognized as chairman by the National Body, they issued me paper and allocated quotas to me and my secretary, but midway, the Secretary General  told me that there was problem with my election and that it will be resolved.

At the meeting, the President announced that since their Election Monitoring Group has disqualified me (not my local branch) the election I won is nullified and that Nurudeen Obara, former Chairman, NBA, Ikorodu has been appointed to come and conduct election within one week and that my office is now vacant.

As leader of this branch and as a legal practitioner, I went to court to get interim injunction, but the Judge said put them on notice, Justice Abdulfatai Lawal, Igbosere said that there is no body of lawyer that will see there is a case in court and will continue to do anything that will foist a situation of fait accompli on it, so I served them including Abuja and Nurudeen Obara, I called him but they continued with the process. Then on 21 of June, they brought out a notice that screening of candidate is 27, and election 29, I came with the Sheriff of court, he was sitting here, the sheriff served him the paper in my presence around 2: 30, yet that same day, the sheriff served him, Obara now sent a message that all the 6 or 7 candidates that came for screening have stepped down for Dele Oloke, the gentleman that brought the policemen and that because of that,  the gentleman has been returned unopposed and that he will be sworn in on  the 29 and he was served with paper of court that I am asking for injunction on the 28. On the 28th, I came to court and got an injunction which states that the defendants, the NBA and their agents, Obara and others should not swear in Oloke or anybody else as Chairman NBA Ikeja.

As leader of this branch I collected credible intelligence that they wanted to come here and swear him in. As you saw today, I took proactive measures, I ordered the Admin staff not to open the office and I went to Commissioner of Police and logged a report and the CP invited Area F Commander who provided security.

Undercover agents came in here, they could not do their swearing in, more important the defendant who will swear him in did not come only for us to hear that he went somewhere maybe kiosk that he has been sworn in and he called his supporters together that he has been sworn in. Swearing in is like marrying a wife, you don’t marry in secret, especially so in a public office. And all what they did , the court said maintain status quo as at 28 when I went to court, Oloke is not in the picture. I will explain the legal position for you. Anything done after 28th by Oloke is irrelevant for the purpose of the court order. The process started for him on the 24th that is what has happened. I am the chairman of the branch

But  he said that your  election has been nullified.

ALSO READ   Diary of a Lagos Rookie Lawyer (16): Practice Has Taught Me (II)

It does not make sense whether logical or legal sense. I am the chairman of this Branch. The people that purport to annul me don’t have the power, check the constitution. The president and the NEC cannot remove an officer of the Branch. The people who elected me can remove me. It is like saying that the Senate will remove Governor Ambode of Lagos. It is not possible and I told them and I am still saying it that I am proud to be at the Centre to challenge the tyranny of the national body.

How can you do that, all of the people I defeated, none of them wrote a petition against me, none of them has gone to court, quote me the national body is busy body interloper. President Augustine Alegeh, SAN in purporting to remove me as chairman in nullifying my election and the NEC that he claimed ratified it did not ratify it because I was there. They tried to disrupt the meeting but I conducted the meeting and I have inaugurated the committee for our AGM.