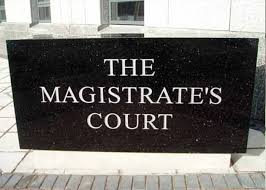 An 18-year-old secondary school student, Sadiq Adegbite, who allegedly stole N200 from a fellow student and used charm to harass other colleagues, was on Thursday brought before an Ogudu Magistrates’ Court in Lagos.

The accused, a student of Junior High School, Ogudu, Lagos, is facing a three-count charge of conspiracy, stealing and disorderly conduct.

According to the prosecutor, Lucky Ihiehie, the complainant, a 15- year -old student of the school, came to Ogudu Police Station to report the incident.

He said while the complainant was returning from school at Emmanuel Street, Ogudu, he was stopped by the accused and some of his friends now at large.

“They were harassing him and searching his pockets for money and they even beat him up.

“They dispossessed him of his N200 transport fare which was the only money he had in his pocket.

“A senior student came to the complainant’s rescue and the accused brought out some charms from his pocket to scare them before the police came,” he said.

Mr. Ihiehie told the court that the accused’s friends ran away on sighting the police.

Mr. Adegbite, however, pleaded not guilty, while his counsel, Olusegun Aghahowa, pleaded with the court to grant him bail on liberal terms considering his age.

In her ruling, the Magistrate, O. Sule-Amzat, admitted the accused to a bail of N10,000 with two sureties, one of who must be a blood relation of the accused with an evidence of gainful employment.

The case was adjourned to November 1 for trial.