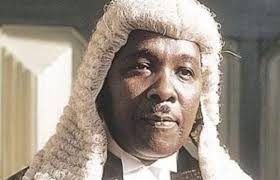 Justice Adeniyi Ademola of the Federal High Court, Abuja, who was among the seven senior judges arrested by men of the SSS last week, has accused the Attorney General of the Federation, Abubakar Malami (SAN) of being behind his ordeal.
Justice Ademola said the immediate reason for his arrest was his decision to grant bail to former National Security Adviser, retired Colonel Sambo Dasuki, and a pro-Biafra leader, Mr Nnamdi Kanu.
But he cited a longstanding friction with Mr. Malami as a reason too.
In a letter to the Chief Justice of Nigeria, Justice Mahmud Mohammed, Justice Ademola said he was assaulted during the midnight operation by SSS operatives.
The SSS accuses Justice Ademola and the other judges of corruption.
Justice Ademola denied the allegation, and said in his letter that he was targeted because he ruled against the SSS in some controversial cases such as the ones involving Messrs. Dasuki and Kanu.
The two men are held by the SSS on separate charges of corruption and treason.
“The search of my residence was based on these allegations: “(i) Petition of Hon. Jenkins Duvie dated 4th of April 2016 to the National Judicial Council (NJC); (ii) Granting bail to Col. Sambo Dasuki and the unconditional release of Nnamdi Kanu. (iii) Using my office to secure my wife’s appointment as the Head of Civil Service Lagos State through Senator Bola Tinubu,” Justice Ademola said.
Justice Ademola said about 45 operatives of SSS stormed his residence and whisked him away in the dead of night, without telling him his offenses or presenting a warrant of arrest.
He said the SSS connived with the Attorney-General and Minister of Justice, Abubakar Malami (SAN) to use his decisions on the bench against him.
“What is more intriguing in this whole episode is that I see it as a vendetta/revenge from the Hon. Attorney General of the Federation, Abubakar Malami (SAN).
“Whilst I was in Kano between 2004-2008 as a Federal High Court judge, he was involved in a professional misconduct necessitating his arrest and detention by my order.
“However, with the intervention of Nigerian Bar Association (NBA), Kano Branch, the allegation of misconduct was later withdrawn by me.
“Consequently, the National Judicial Council (NJC) referred Abubakar Malami (SAN) to the NBA Disciplinary Committee for disciplinary action,” Justice Ademola said.
Justice Ademola said the case cost Mr. Malami his initial prospect of becoming a Senior Advocate of Nigeria.
“It was as a result of this he was denied the Rank of SAN by the Legal Practitioners Privileges Committee for a period of four years until when he produced a fake letter of apology, purportedly addressed to me.
“It was then he was conferred with the rank. Since the above incident, Abubakar Malami (SAN) has threatened to revenge and swore to do anything to bring me down,” the judge said.
Justice Ademola denied the allegations against him, including charges that he was in possession of unlicensed firearms.
Justice Ademola provided details of how he was frightened after operatives arrived at his home in the middle of the night and how they conducted their operation before leaving the property in shambles”.
“I saw at about 45 masked officers of the State Security Services, all heavily armed pointing their guns at me,” he said.
“They flashed a document purported to be a search warrant and ordered me to sign a document claiming that they had already conducted a search downstairs.
“They also added that I was totally under their control today as I have always made orders against them,” Justice Ademola said.
Justice Ademola said operatives later presented him with a list of items that were found in his home which could be used as exhibits, but he initially declined to sign the paper.
“They threatened me if I did not sign it they would not leave me alone and whatever they did to me at that point would be recorded that I will not be alive to tell the story of what transpired between me and them that night.
“For fear and interest of my life, and unknown persons with masks on their faces, I collected the written items and signed the document,” Justice Ademola said.
The judge said he has been putting up at a hotel in downtown Abuja and sought permission to proceed on leave during which he intended to pursue a remediation for alleged breach of his fundamental rights by the SSS.
”My Lord, with this infringement of my fundamental right, I seek for the leave to commence an action against the State Security Service to enforce my right that was breached,” Justice Ademola said.
Barnabas Hunjo, Esq.