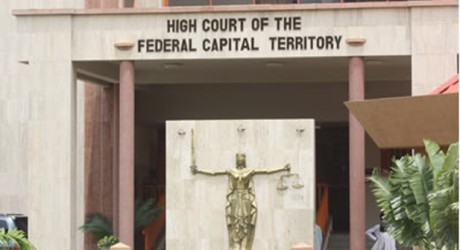 Justice Adeniyi Ademola of a Federal High Court in Abuja and his wife, Olabowale, who is the Head of Service of Lagos State, were scheduled to be arraigned on Monday before a High Court of the Federal Capital Territory, Maitama, on charges of receiving gratification, but the arraignment could not proceed because of their absence.

The defendants were absent because they had not been served with the charges.

The trial judge, Justice Jude Okeke, adjourned the matter till December 13, 2016, after the defendants’ lawyer, Mr. Jeph Njikonye, volunteered to accept service on behalf of his clients.

Lead prosecuting counsel, Mr. Segun Jegede, had told the trial judge that court bail bailiffs attempted to serve the couple with the charges but they were said to have travelled to Lagos.

He said he was going to ask the court to give an order for service on the defendants through substituted means but that was no longer necessary as the defence counsel had approached him before the proceedings commenced volunteering to accept service on behalf of the defendants.

Jegede urged the court to grant leave to serve the defendants through their lawyer on the strength of section 382(5) of the Administration of Criminal Justice Act.

Njikonye, although, expressed readiness to accept service on behalf of his clients, said he was not aware of attempts to serve the couple personally and so section 382(5) of the ACJA was not application.

The defence lawyer however submitted that the court under its inherent powers grant the leave for service.

ALSO READ   Politicians Like Virus Have Finally Infiltrated the "Holy of Holies" - B. O Oladeji Laments

Justice Okeke, in his ruling, said record showed that a court bailiff attempted to serve the defendants in Abuja, on December 2, but were said to have travelled to Lagos.