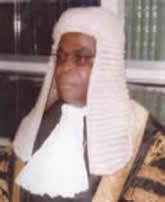 Despite initial concern, the nation’s judiciary has sustained the age-long succession-by-seniority for the appointment of the next Chief Justice of Nigeria (CJN).

The nominating authority, the Federal Judicial Service Commission (FJSC), on Thursday, nominated the most senior justice of the Supreme Court, Justice Walter Nkanu Onnoghen, as the next número uno of the judiciary.

He is to succeed outgoing CJN, Justice Mohammed Mahmud, who is retiring on November 10, 2016 when he would clock the mandatory 70 years.

Sticking with the usual practice, the commission also nominated alongside Onnoghen, the next justice in seniority line to the CJN-designate, Justice Tanko Mohammed, as stand-by nominee, as well as another senior justice.

The stand-by nominee is designed for consideration if the original nominee is rejected by the appointing authority.

There has been no precedent of such rejection at the presidency level, though a couple of state governors had shunned council’s choices in recent past.

Three names would be forwarded to the National Judicial Council (NJC), which is the recommending authority. The council would, in turn, recommend two names to the president.

The Cross-River-born senior judge is the first Southern claimant to the judiciary top-job in about 29 years.

The last Southern CJN was Justice Ayo Gabriel Irikefe, who retired in 1987. There have been seven northern CJNs in-between.

At the consideration of judicial appointments on Thursday, the commission also considered those in contention for the position of the Executive Secretary of the National Judicial Council (NJC).

The three front-runners are the Chief Registrars of the Supreme Court and the Court of Appeal, as well as the Executive Secretary of the National Judicial Institute (NJI).

The trio were reportedly recommended to the NJC, with the Chief Registrar of the apex court, Ahmed Saleh Gambo, said to be the favourite.

The incumbent, Alhaji Danladi Halilu, is due to retire in March 2017.