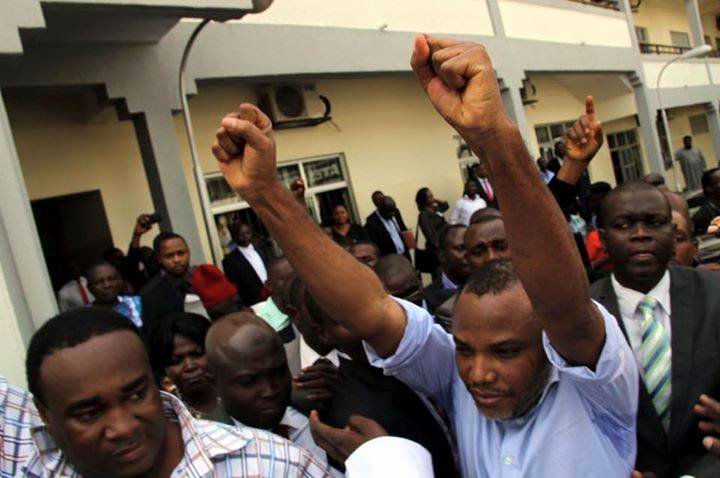 The detained leader of the Indigenous People of Biafra, IPOB, Mr. Nnamdi Kanu and two other pro-Biafra agitators, David Nwawusi and Benjamin Madubugwu, have asked the National Judicial Council, NJC, to probe the judge presiding over their trial, Justice John Tsoho. The trio who are facing a six-count treason charge before the Federal High Court in Abuja, alleged that Justice Tsoho had in the course of their ongoing trial, delivered conflicting rulings. The defendants, in a joint petition they filed through their lawyer, Mr. Ifeanyi Ejiofor, told the NJC that the trial judge indulged in “judicial rascality,” by reversing his previous ruling that barred the Federal Government from masking all the witnesses billed to testify against them.

They contended that Justice Tsoho, having ruled on the issue, ought not have reversed himself and granted the same application, an action they said should have been taken by the appellate court. Besides, the defendants alleged that the trial judge denied them fair hearing on the day it gave the prosecution the nod to produce masked witnesses against them. Kanu told the NJC that Justice Tsoho frustrated efforts by his lawyers to obtain the rulings as well as the record of proceedings of the court. He said that it took the intervention of the Chief Judge of the Federal High Court, Justice Ibrahim Auta before a copy of the rulings and the record of proceedings in the matter was released to him.

“The rulings were eventually given to us on Monday, April 25, 2016, barely two months and fifteen days after the ruling of February 9, 2016, was delivered, two months and six days after the ruling of February 19, 2016, was delivered and one month and 18 days after the ruling of March 7, 2016 was delivered,” he disclosed. The IPOB leader further told the judicial body that Justice Tsoho declined to allow his lead counsel, Muoma, SAN, to adumbrate his written brief in support of application   for stay of proceedings in the matter, even when the rules of the court allows for 20 minutes of oral argument. It will be recalled that the defendants had sequel to an earlier letter dated  April 26  and an accompanied verifying affidavit on oath dated  May 24, asked Justice Tsoho to temporarily hands-off their trial.

In a motion they filed pursuant to Section C Rule 1(A) of the Federal Republic of Nigeria Code of Conduct for Judicial Officers and Section 36 of the 1999 Constitution, as amended, the defendants applied for an order disqualifying Justice Tsoho from further proceedings in this matter. The three defendants had opposed FG’s application for secret trial, even as they queried the propriety of the court allowing “masquerades” to testify against them. Meantime, Justice Tsoho will on Monday hear the defendants’ application to disqualify him from handling the trial. Kanu who was hitherto the Director of Radio Biafra and Television, has been in detention since October 14, 2015, when he was arrested by security operatives upon his arrival to Nigeria from his base in the United Kingdom.