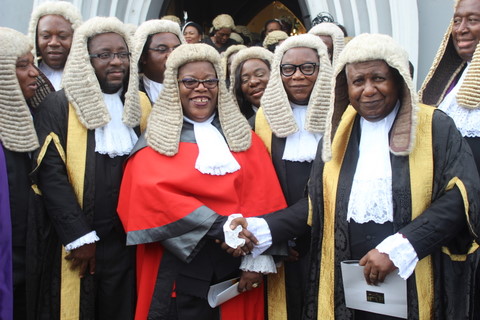 The Chief Judge of Lagos state, Justice Oluwafunmilayo Atilade has called for a mutual relationship between the br and bench so as to be effective in the delivery of justice to clients and general public.

This was in a speech delivered by Her lordship at the Bar and Bench forum held at the Foyer of the Lagos High court, Igbosere on the 27th of September to mark the new legal year.

Atilade said “the fact that this forum is taking place so early in the new legal year underscores the importance this administration places on a good working relationship between the Bar.”

She charged the Bar as officers of court to prepare meticulously for their matters ensuring that the wheels of justice do not grind to halt.

She urged lawyers and judges to show respect toward each other in discharging their duties so as to grant the country a desirable future. “We must therefore maintain mutual respect and work together to attain effective justice”

Commending the efforts of the state government, she said there has been significant improvement in justice delivery especially with the appointment of 39 new magistrates.  “We have also reintroduced departmental heads who are the chief magistrates to oversee registries in Lagos and Ikeja”.

She informed the forum that the administration has been able to work with the executive and legislative branches of the government towards full autonomy of the judiciary.

On prison decongestion, a total number of 285 inmate has been released between the September 2015 and 2016. The prison decongestion committee headed by Hon. Justice Toyin Ipaye quarterly visits the prison to release awaiting trial inmates. She therefore enjoined the court to use alternatives to imprisonment such as fines and community service where appropriate.

Atilade applauded the support and cooperation of His Excellency, Akinwunmi Ambode, the governor of Lagos and that of the Right Honorable Mudasiru Obasa, the speaker of Lagos state House of Assembly in ensuring that the judicial system move forward smoothly in achieving set goals. She urged the state government to appoint more justice due to high number of cases filed and heard in the state and the congestion of court.