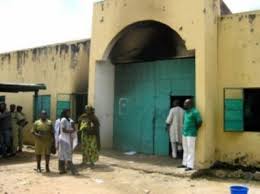 The Chief Judge of Lagos State, Justice Olufunmilayo Atilade has granted amnesty to 11 inmates of the Badagry Prisons.

The freed inmates were among the 174 inmates whose names were sent to the Lagos State Prisons Decongestion Committee headed by Justice Oluwatoyin Ipaye for a review of their cases.

Exercising her constitutional power to pardon deserving prisoners, Justice Atilade pronounced the 11 inmates free and urged them go and sin no more.

According to the Chief Judge, the amnesty was granted without prejudice to any charge that may have been preferred against them.

Justice Atilade, who noted that this was her first visit to the Badagry Prisons since her appointment as Chief Judge, emphasized that her goal was to reduce the number of awaiting trial inmates in prisons across the state.
The Chief Judge commended various stakeholders such as the Nigerian Bar Association , Directorate of Public Prosecution, Office of the Public Defender, Prisons Decongestion Committee and numerous Non Governmental Organizations which worked tirelessly to ensure the freedom of the inmates.

Badagry prisons which has capacity for 160 inmates presently has 370 inmates.

Man remanded in prison for stealing taps from mosque