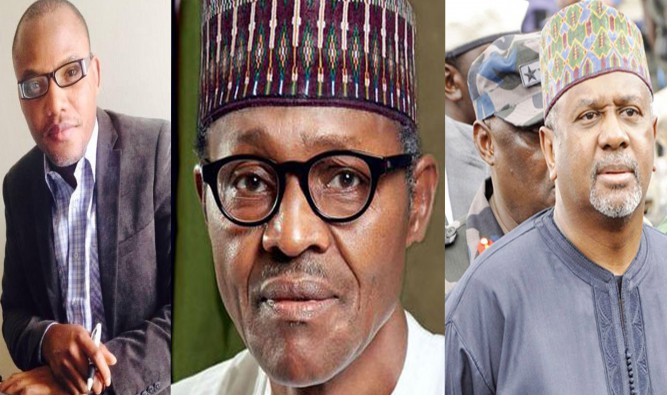 Constitutional lawyers and human rights activists from various parts of the country yesterday staged a protest in Abuja against the continued detention of former National Security Adviser, NSA, Mohammed Sambo Dasuki, retd, and others, in spite of bails granted them by the court.

They flayed the executive arm of government for attempting to derail the rule of law and democracy with utter disregard to valid and lawful court decision.

The protesters made copious reference to the ECOWAS Court of Justice which ordered the release of Dasuki.

The lawyers also accused the executive arm of mistaking persecution for prosecution, insisting that any government or agency not obeying valid court order could not claim to be prosecuting offenders but persecuting them.

The group also passed a vote of confidence on the National Judicial Council, NJC, over the matured manner and clear terms the council had been handling the invasion of the houses of two Supreme Court Justices and five other cadres by operatives of the Department of State Services, DSS.

The legal practitioners, who claimed that the unconstitutional manner the judges were arrested was a threat to democracy, appealed to the United Nations, United Kingdom, United States of America and Amnesty International to call the Federal Government to order and stop disobedience to the rule of law.

The lawyers,’ operating under the aegis of “Lawyers in Defence of Democracy” and the human right activists, operating under the platform of “Citizens for Good Governance”, jointly accused the executive arm of government of plotting to overthrow the judiciary so as to enthrone abuse of human rights and subversion of the rule of law.

Why I was Reappointed Nigeria’s Justice Minister – Malami