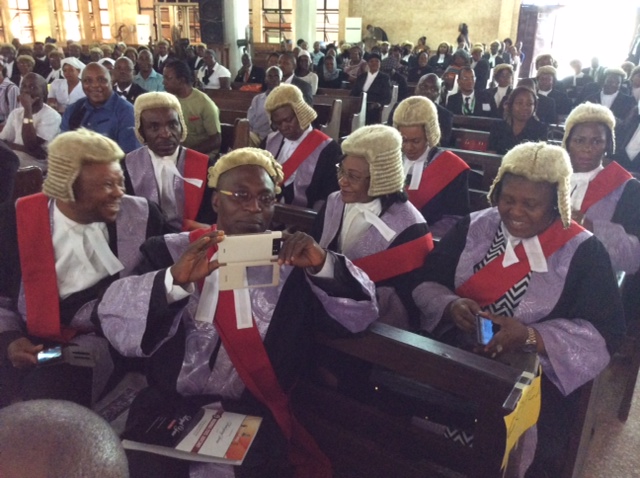 Practising lawyers and judiciary workers in Anambra State yesterday bemoaned the state of the judiciary in the state, saying that based on what was on ground, the state judiciary could be described as an establishment in chains. Speaking during the ceremony to mark the commencement of this year’s legal year, former vice chancellor of Nnamdi Azikiwe University and the most senior member among the Senior Advocates of Nigeria, SAN, Professor Ilochi Okafor, who spoke on behalf of the lawyers, berated the state governor, Chief Willie Obiano for the state of affairs in the state judiciary.

He said: “The condition of the state judiciary is a shame, a big shame and does not speak well of the state”. He condemned the Attorney General of the state, Mr. Anali Chudi and the Speaker of the House of Assembly, Mrs. Rita Maduagwu, both of whom were present at the occasion, for not speaking for the judiciary despite the fact that both were lawyers. Okafor said it was a miracle that none of the lawyers and judges fell on the muddy premises of the judiciary, which was worsened by the downpour in Awka yesterday.

Earlier during the church service at St Patrick’s Cathedral, Awka to mark the commencement of the new legal year, Governor Obiano promised to increase the subvention of the judiciary by 100 percent to enable it meet its obligations. According to the governor, the increased subvention would also enable the judiciary to renovate dilapidated courtrooms and improve the welfare of the judiciary staff. The governor observed that crime and criminality were bound to increase during recession and urged the judiciary to ensure quick dispensation of justice so as to reduce the number of cases in the courts.

The chief judge of the state, Justice Peter Umeadi said the judiciary would continue to do what the constitution demanded of it to ensure quick dispensation of justice. Umeadi sympathized with judiciary workers for the deplorable condition of the courts in the state, saying it would seem that their sense of duty got accentuated even as their conditions of service and that of their work place got more parlous. Describing the rule of law as the harbinger of peace, Umeadi said there was need for the executive arm of government to support the efforts of the judiciary to ensure quick dispensation of justice in the state.