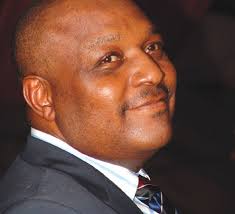 The EFCC on Tuesday closed its case against former Taraba governor Rev. Jolly Nyame, who is standing trial before an FCT High Court on charges of N1.6bn fraud.

The EFCC’s counsel, Rotimi Jacobs (SAN), told the court that the prosecution had decided this morning to close the case against the former governor.

In response, the lead defence counsel, Mr. Omosanya Popoola, said that he would file a “No case submission.”

“In view of the closure of the prosecution case, we shall be making a no case submission pursuant to Section 303 of the Administration of Criminal Justice Act,’’ Popoola said.

He said he would serve the prosecution with the written address next week.

News Agency of Nigeria reports that the prosecution closed its case after calling 14 witnesses during the trial, which started since 2010.

Nyame is facing trial on a 41-count charge of criminal misappropriation of N1.64bn state funds during his tenure as governor. (NAN)

Jammeh’s Lawyer, Asks Him to Step Down, Flee Gambia