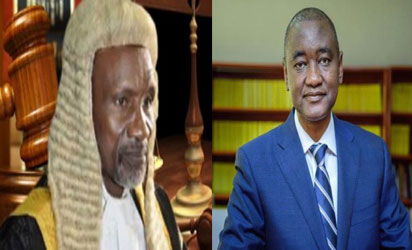 Nigeria’s body of lawyers is to meet with the Chief Justice of Nigeria (CJN) to take a harmonised position on the fate of the seven judges being investigated by the Department of State Services (DSS) and save the judiciary from further embarrassment.

“Our Exco members will be meeting the Chief Justice of Nigeria on Thursday to harmonise these issues; I do not think we should blow this up anymore,” Monday Ubani, second vice president of the Nigeria Bar Association (NBA) told The Guardian in an exclusive telephone interview Sunday.

The DSS raided the homes of the judges during separate operations in the early hours of October 7 and 8 and arrested two justices of the Supreme Court — Iyang Okoro and Sylvester Ngwuta. Others are Kabir Auta of the Kano High Court, Mohammed Tsamiya of the Court of Appeal, Ilorin, Adeniyi Ademola of the Federal High Court Abuja, Muazu Pindiga of the Gombe High Court and the Chief Justice of the Enugu State, I.A Umezulike.

The NBA is pushing for the suspension of the judges from official duties until the DSS concludes its investigation. The lawyers now have the support of the body of Senior Advocates of Nigeria (SANs) which met on Saturday in Lagos with the Attorney General of the Federation and Minister of Justice in attendance.

The Chief Justice of Nigeria,Mahmoud Mohammed, who also chairs the National Judicial Council (NJC), in response to NBA’s call to suspend the judges, said the DSS had yet to send any formal petition to the NJC. The NJC is a federal executive body created by law to insulate the Judiciary from the interference of the Executive arm of government and guarantee its independence as a separate arm of government.

Justice Mohammed in a statement on Saturday hinged the decision of the NJC not to suspend the judges yet on the rule of law, arguing that the misunderstanding was between the NJC, which was established by the Constitution and DSS, which “belongs to the presidency.”

The CJN described the call by the NBA as “unnecessary and hasty since the said judicial officers are still being investigated by the DSS.”According to Ubani,  lawyers’ position on the matter is being misconstrued by Nigerians. “The NBA says we should not ridicule the Judiciary any further by charging sitting judges to court. That’s what we mean,” he told The Guardian.

“Stepping aside will pave the way for trial. It does not make sense charging a sitting judge. It will further undermine the power and sanctity of the Judiciary.”

Ubani explained that the NBA remained strong in condemning corruption and in supporting President Muhammadu Buhari’s anti-graft crusade.“We want a corruption-free judiciary but in fighting corruption, it should be done within the ambit of the law,” he said.