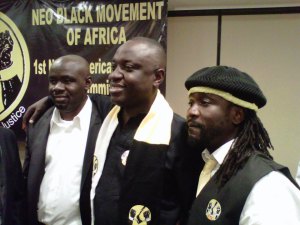 The Neo-Black Movement of Africa (NBM) has vowed that it will maintain its fundamental objectives and principles, and strive to eradicate all forms of oppression, intimidation, corruption, injustice, neo-colonialism among other vices from the society.

The group also stated that one of its objectives is to protect inmates in Nigerian Prison especially those awaiting trial.

According to NBM, “The Nigerian criminal justice system is such that in a prison of 2,000 inmates, only about 300 would be convicted. This is totally unacceptable as it is a clear case of injustice. We all know that justice delayed is justice denied.”

With the above vows, the NBM yesterday in Lagos restated its mission to enthrone an egalitarian society where everybody gets his or her fair deal.

The group’s President worldwide, Chief Felix Kupa, who gave the pledge during a visit to Ikoyi Prisons in Lagos where his association gave free legal services to inmates, added: “The NBM of Africa has resolved to channel its humanitarian services in this direction. My team and I are here today with a view to contributing our own quota towards resolving this problem.” He dispelled stereotypes connecting the association to cultism and related vices, stressing that the movement was lawful and abhors criminality.

“NBM is not synonymous with Black Axe or any secret cult or organisation. We are aware that some imposters and miscreants use the name of our organisation to seek asylum abroad under the pretense that they are being hunted by NBM. It is unfortunate that the authorities do not investigate these claims before such disgruntled elements are granted asylum,” he clarified. Kupa threatened legal action against any individual or organisation that tries to tarnish the group’s reputation by way of deeds or actions.

The National Legal Adviser, Chief Hope Aliu, observed that the event was a clear case of advocacy for the less privileged in the society.

He painted a sordid situation in the nation’s prison system where the legal practitioner held that awaiting trial prisoners account for 80 per cent of inmates nationwide.

“At my last visit to Ikoyi Prison, the total number of inmates were 2,362 out of which only 313 were convicted. That means 2,049 are awaiting trial,” he summarised.

The movement picked special interest in 17 year-old mechanic from Niger State, Abdul Saliu, who is being held in custody wrongly owing to lack of legal representation.

The officer in charge of the Ikoyi Prison, Julius Ezugwu, a Deputy Comptroller of Prison (DCP), while thanking the association for the gesture, reeled out the challenges confronting his establishment and pleaded for more assistance from other public-spirited individuals and organisations.

In his goodwill message, the immediate past president worldwide of the movement, Hon. Bemigho Eyeoyibo, commended the present team for not only consolidating the gains made over the years but for also adding a fresh fillip through visitations to prisons and camps of internally displaced persons (IDPs)

Highlight of the event was a tour of the facility led by the DCP where the association saw for itself the true state of things and subsequently pledged to do more for the organisation.