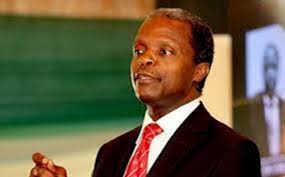 Vice President Yemi Osinbajo on Tuesday said it was fundamental for the judiciary to fight corruption in order to protect its independence. He said this at the 2016 Fellows Lecture and Conferment of Honourary Fellowship on him and three others by the Nigerian Institute of Advanced Legal Studies (NIALS), in Abuja. According to him, the most potent threat against judicial independence is corruption.

His Full Speech Below:

ACCEPTANCE REMARKS BY HIS EXCELLENCY, VICE PRESIDENT PROF. YEMI OSINBAJO, SAN, GCON, AT 2016 FELLOWS’ LECTURE & CONFERMENT OF HONORARY FELLOWSHIP ON HIM AND THREE OTHERS BY THE NIGERIAN INSTITUTE OF ADVANCED LEGAL STUDIES, NIALS, ON NOVEMBER 15, 2016

On behalf of the very distinguished awardees of the  Fellowship of the Nigerian Institute of Advanced Legal Studies:
*The Hon Justice  Amina Augie, Justice of the Supreme Court,
*Prof. Ameze Guobadia, former Director-General of the NIALS,
*and Chief Joe Kyari Gadzama SAN OFR, MFR,

Let me express our sincere gratitude for this preferment to the Director-General of the Institute, Prof. Deji Adekunle, the Council and distinguished faculty of the Institute.

Nigeria’s formal legal tradition is over 100 years old. That tradition has 3 established components: the Bar, Bench and Academia. Each branch has distinguished itself through the years and has attained world class status.

In all the serious researches on the best known  administration of justice systems, it is evident that at various points in their histories, the institutions were challenged by  falling standards, corruption, and abuse of office.  When this occurred, the profession itself had often made the first and farthest drastic moves to self-correct.
One of the great difficulties of the legal profession in Nigeria is our shyness and reluctance to call ourselves to order. Nobody wants to be held responsible for  possibly ending the career of another.   So we watch the decay and gradual collapse of an excellent tradition built on the self-restraint, sacrifices and integrity of many in the past 100years.

Chief Awomolo, SAN, (today’s Guest Lecturer) has said the legal profession we fought for is not what we now have.  Many past and present members of the bench have also said so. I agree with them. But he said things would improve. How?

Let me say that we in the legal profession owe ourselves a duty to preserve the Administration of Justice System not only because it is the last hope of the common man but because this is our means of livelihood. Our profession and the credibility of the Administration of Justice System depends entirely on public confidence, once that is eroded because of the delinquency of a few, we, the majority must fight hard against it.

Judicial independence is spoken of sometimes as though it is a favour we do to the judiciary: no it is not. It is not a favour or a privilege to them. It is the essence of our system of justice. A judge must be independent for at least one reason: so that he or she can be fair and just, without fear or favour. This is the reason why the executive must neither interfere in judicial process  nor attempt to compromise judicial independence in any way.

Finally, let me again, commend the NIALS for its commitment to the highest academic traditions. As the DG said the award to me is almost a family affair, the Faculty of Law, University of Lagos, and NIALS were in the same complex, and we of the faculty interacted, argued and sparred daily with the great intellectuals of the Institute led at various times by Justice Akinola  Aguda, of blessed memory, Prof. Ayo Ajomo, Prof Ignatius Ayua, SAN,  Prof Ameze Guobadia, Prof Epiphany Azinge, SAN,  and now Prof Deji Adekunle.

As fellows, we pledge our  commitment to the Institute’s mission of being the nucleus and hub of legal research and advanced studies in law in Nigeria.