Home News When Nigeria was still a country! 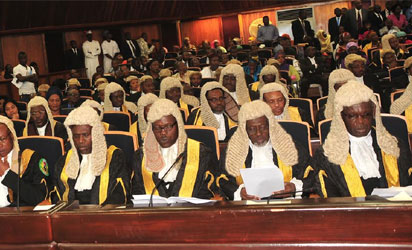 There was a time in the life of this country when litigants would not dare go to the house of a Judge. Who would let you in? Who would entertain your company? The Judge of yesteryears, that old crispy, pristine Judge, would never entertain a litigant in his home. The most important thing to him, was public perception of his rectitude and his sense of fairness. Anything that appeared to be or gave the appearance of partiality, he avoided. Yes, he was poor. But he had an abundance of integrity. And that to him was worth far more than rubies.

But not today’s Judge. Today’s Judge, even of the Supreme Court, entertain litigants in his home and is not afraid to discuss pending cases with them. When a dispute arises, he even would have the temerity to write about the experience in a letter and publishes it to the public.

But by some strange alchemy, he all the while considers himself a victim. He sees nothing wrong in what he did. In fact, we probably would never have heard about this private conclave with litigants had it not been for the DSS raid. But somehow, he is the victim. Now we know he had a private meeting with aspirants from the APC, but we do not yet know if he also met with those from the PDP. We would perhaps not know, for now, until a quarrel breaks out within the rank of PDP, then he will be accused. Then he will write another letter. Then we will know.

I was raised by a lawyer. Incidentally, he was my father. Never once did he visit any Judge at home, not to talk of visiting a Judge before whom he had a case. Even in the office, as he always told me, a Judge would not see him privately unless the lawyer on the other side was present. That office, according to my father, carried a certain overbearing dignity that compelled men to lower their gaze at the passing of a Judge. It was almost metaphysical. No, they did not have many friends, and so expected no visitors on social calls in their houses. And because Rule 1 (2) of the Code of Conduct for Judicial Officers states that:

“A Judicial Officer must avoid social relationship that are improper or give rise to an appearance of impropriety, that cast doubt on the judicial officers ability to decide cases impartially, or that bring disrepute to the Judiciary”

they altogether avoided anything that would bring disrepute to the bench, especially cavorting with litigants.

But you see, I speak not of today’s Judges. I speak of the Judges of yesteryears!! That was when Nigeria was still a country!

Those Who Laid Siege on Justice Odili’s Residence will be Brought...

Man, Woman in Court for Smearing Faeces on Selves