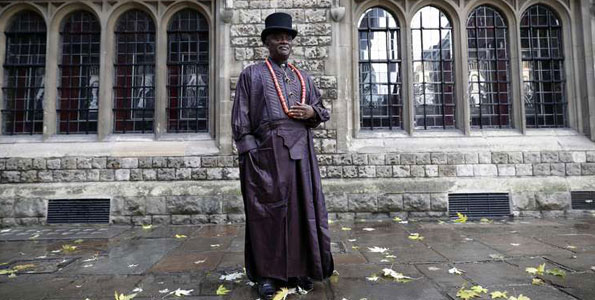 King Emere Godwin Bebe Okpabi holds up a plastic bottle containing contaminated water from his community in Nigeria, proof of oil pollution that he blames on Royal Dutch Shell — and on which he hopes a London court will deliver justice.

“My people are drinking this water,” said the tribal king of the Ogale community in the oil-rich Niger Delta.

Okpabi has flown to London for a High Court hearing on Tuesday in which lawyers for more than 40,000 Nigerians are demanding action from Shell to clean up oil spills that have devastated their communities for decades.

“There are strange diseases in my community — skin diseases, people are dying sudden deaths, some people are impotent, low sperm count,” he told AFP. “I can afford to buy water. But can I afford to buy for everybody? No.” The Anglo-Dutch oil giant argues that the case should be heard in Nigeria, pointing out that it involves its Nigerian subsidiary SPDC, which runs a joint venture with the government, and Nigerian plaintiffs.

But Okpabi, wearing a traditional robe with a red necklace and black top hat, said the English justice system was his only hope to end the blight on his people’s lives.

“Shell is Nigeria and Nigeria is Shell. You can never, never defeat Shell in a Nigerian court. The truth is that the Nigerian legal system is corrupt,” he said.

He wants the High Court to compel Shell to implement a 2011 landmark report by the UN Environment Programme (UNEP), which warned of dangerously high levels of hydrocarbons in the water, bitumen-coated mangroves and poor air quality.

It should order the company to “go and clean-up Ogale, go and provide water for them; go and do medical history for them, and where medical attention is needed provide for them,” he said.

The king said no money would be enough to address the damage, which UNEP warned could take 25 to 30 years to resolve, but wants compensation, adding: “We are dying.” – Sabotage – Shell will challenge the jurisdiction of the English courts in the case during three days of hearings this week, while it also disputes the claims made by lawyers Leigh Day, who represent Ogale and the smaller Bille community.

“Both Bille and Ogale are areas heavily impacted by crude oil theft, pipeline sabotage and illegal refining which remain the main sources of pollution across the Niger Delta,” a company spokeswoman said. She noted SPDC has not produced any oil or gas in Ogoniland, the region surrounding Ogale, since 1993.

But Okpabi and his lawyers say the company’s ageing, leaky pipelines still run through the region and it must take responsibility. SPDC says it has delivered water and healthcare to the community and is supporting the implementation of the UNEP process by the government, which in June launched a $1 billion (£800 million, 940 million euros) oil pollution clean-up programme in the Niger Delta.

Okpabi said he believed President Muhammadu Buhari is “sincere” in wanting to address the issue, but warned: “If we wait for the system to roll on its own, I hate to say this, but it may be too late for the people of Ogale.” Attacks on Nigerian pipelines have increased this year, cutting output and helping tip the country into recession, but Okpabi insists “there is no vandalising” in Ogale.

The king condemned the saboteurs, warning that “you cannot bomb your house to get attention”. However, he added: “I’m also appealing to Shell and the Nigerian government to listen to those communities that are non-violent and do something.” In January 2015, Shell agreed to pay more than $80 million to the Nigerian fishing community of Bodo for two oil spills in 2008, following a case brought by Leigh Day in London.

In December, a Dutch court permitted four Nigerian farmers and fishermen to sue the company for environmental pollution, potentially opening the door to other cases to be brought in the Netherlands.