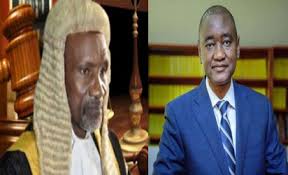 The National Judicial Council (NJC) on Friday rejected the suggestion by the Nigerian Bar Association (NBA) to suspend serving judges who were among the seven arrested by the Department of State Service (DSS) between October 8 and 9.

The NJC, in a statement by its Acting Director, Information, said it had no powers to suspend serving judges without investigating a petition accusing the affected judges of certain acts of misconduct.

It said lawyers who were part of the members of the NJC participated in the emergency meeting of the NJC where the raid on the houses of and the arrest of judges were condemned.

The NBA President, Mr. Abubakar Mahmoud (SAN), speaking at the valedictory court session held in honour of a retiring Justice of the Court of Appeal, Justice Sotonye Denton-West called for the affected judges to either recuse themselves from further judicial functions or proceed on compulsory leave pending the proof of their innocence.on

In its reaction to NBA’s stance on Friday, the NJC said acting in line with NBA’s suggestion would amount to violation of section 158 of the Constitution.

The statement read in part

...“‎Thus, the current position of the Nigerian Bar Association vis-à-vis its recommendation that the affected judicial officers involved in the on-going investigation of Judicial Officers by the DSS, be requested to proceed on compulsory leave until the conclusion of all disciplinary proceedings against them, is unacceptable to the NJC; as it breaches the 2014 Revised Judicial Discipline Regulations formulated by NJC pursuant to Section 160 of the 1999 Constitution of the Federal Republic of Nigeria, as amended.

“It is to be reiterated also that by the provisions of Section 158 of the 1999 Constitution of the Federal Republic of Nigeria, as amended, NJC shall not be subject to the direction or control of any other authority or person while exercising its disciplinary power of control over Judicial Officers in the Federation.

“The members of the public are hereby informed that the mechanism that will determine a judicial officer to be directed or requested to proceed on compulsory leave or be suspended from office, is a disciplinary power that NJC can only exercise after initiating disciplinary proceeding on the complaint or petition forwarded against the Judge, after he has been found culpable.

“Therefore, to act on the recommendation of the NBA, it is not only contrary to the provisions of Section 158 of the 1999 Constitution of the Federal Republic of Nigeria, as amended, but it means NJC will direct any judicial officer that has been petitioned even if the allegations contained therein are frivolous and baseless, to proceed on compulsory leave or be suspended from office without complying with the rule of law.

Keyamo SAN Gets Backlashes for his Comment on Atiku’s Defection