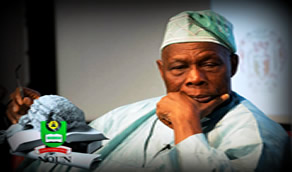 Former President Olusegun Obasanjo Tuesday said he had written to Council of Legal Education (CLE) over the purported refusal of CLE to admit law graduates of National Open University of Nigeria (NOUN) into the Nigerian Law School.

Obasanjo disclosed this while addressing the National Executive members of NOUN Law Students Association of Nigeria (LAWSA), led by Paul Ndi Oyemike, as well as NOUN Alumni, led by Lawal Olutoyin, who paid him a courtesy visit at his Hilltop mansion in Abeokuta, Ogun State, Tuesday.

The meeting was sequel to Obasanjo’s visit to the Abeokuta Study Centre of NOUN on August 27, when the school management sought his intervention on the admission of the school’s law graduates into the Nigeria Law School.

“I’ve written to the CLE but it seems some people out there didn’t get it right,” Obasanjo said, adding; “they said the school of law is offering correspondence programmes and I said it to anyone I met that I graduated from the school and I am presently running my Masters and PHD in NOUN, so the notion is incorrect.”

Obasanjo said that undermining any part or portion in NOUN is undermining the whole institution, adding that such development will be resisted.

He added that NOUN is a novel institution that is growing everyday, saying the institution’s management were also working hard to further develop the school.

He however urged students particularly law graduates of NOUN to be patient with the authorities, saying getting accreditation is not automatic.

Controversy has been trailing the disbanding of law graduates of NOUN, a federal university accredited by the National Universities Commission (NUC) by the Council of Legal Education (CLE), saddled with the responsibility of admitting law graduates into the Nigerian Law School, a prerequisite to qualify as a lawyer.

LawPavilion Webinars: “Digital Transformation and Your Law Firm; What You Should...