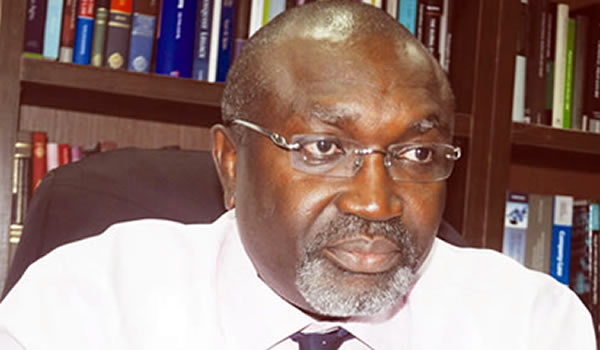 A Federal High Court in Lagos on Friday struck out a N1bn fundamental rights enforcement suit filed by a Senior Advocate of Nigeria, Chief Godwin Obla, against the Economic and Financial Crimes Commission.

Obla, who was detained by the EFCC for allegedly offering a N5m gratification to Justice Rita Ofili-Ajumogobiaof the Federal High Court, had filed the suit urging the court to declare that his detention beyond 24 hours by the EFCC was unlawful.

He had also, through his lawyer, Mr. Ifedayo Adedipe (SAN), urged the court to declare that the seizure of his mobile telephone by the EFCC was a violation of his fundamental right to own property.

But in his judgment on Friday, Justice Mohammed Idris, who presided over the case, declared that he found nothing unlawful in Obla’s detention, noting that fundamental rights were not absolute.

The judge noted the argument of the EFCC lawyer, Mr. Rotimi Oyedepo, that Obla and Justice Ofili-Ajumogobia were detained based on reasonable suspicion of commission of a crime and that there was a pending criminal charge against them before a Lagos State High Court.

Oyedepo had also told the judge that Obla’s mobile phone had been listed as an exhibit to be tendered in evidence against him before the Lagos State High Court.

He also said Obla was remanded on the remand order of a Lagos State’s Magistrate Court obtained on November 9.

“Your Lordship is enjoined not to be used as a shield against lawful prosecution. We should not be restrained from carrying out our lawful assignment,” Oyedepo had prayed the court.

Giving judgment on Friday, Justice Idris held, “It is not in dispute that the mobile phone of the applicant was listed as one of the exhibits which the respondents intends to tender in the charge number LD/367/C/16.

“There is doubt that the relief sought does not have direct bearing with the case at the Lagos High Court, and so, this court should not make an order that will strike at the heart of the charge.

“This is a case in which the court should not make any such orders, as this court and the Lagos State High Court are courts of concurrent jurisdiction

“To make any order which will have effects on the pending charge, will be to lend a helping hand in causing confusion in our courts.

“In the circumstance, I cannot find my way clear in granting any of the reliefs sought.
“On the whole, I find that this application cannot succeed, and it is hereby struck out.”‎