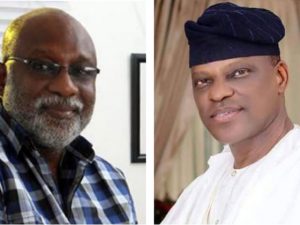 Muyiwa Oyinlola writes about the emergence of two Senior Advocates as flag bearers in the November governorship election in Ondo State.

After weeks of postponements, the All Progressives Congress (APC) in Ondo State at the weekend held its governorship primary for the November 21 Governorship poll in the state, leading to the emergence of Rotimi Akeredolu, as its candidate.

Akoredolu’s emergence is coming less than two weeks after the victory of Eyitayo Jegede (SAN) as the candidate of the ruling Peoples Democratic Party (PDP) for the November governorship poll.

Akeredolu pulled a total of 669 votes to defeat his closest rival, Segun Abraham who got 635 votes from the 2,774 delegates. Recall that Akeredolu was the flagbearer of the defunct Action Congress of Nigeria (ACN) in the 2012 governorship election in the state.

Meanwhile, the emergence of Akeredolu (SAN) as the flagbearer of the APC in the forthcoming gubernatorial election in Ondo state has been described as divine, testimony to the democratic qualities of Asiwaju Ahmed Bola Tinubu and his commitment to internal democracy, freedom for people to freely elect the leaders of their choice and victory for democracy.

In a statement by Ondo State Eminent Personalty group signed  by its President, Barr. Banji Alabi, the group said the process that produced Akeredolu is not only transparent but a proof that godfatherism no longer has a place in Ondo State politics.

While calling on other co-contestants in the APC gubernatorial primary election to join hands with Akeredolu to ensure the victory of the party in the Nov 26 polls, the group equally enjoined Akeredolu to justify the confidence the party has resposed in him to give the people of Ondo state better governance.

Whereas Akeredolu is a former Chairman of Nigerian Bar Association (NBA), Jegede of the PDP is a former Attorney General and Commissioner for Justice in Ondo State, and they are both Senior Advocates of Nigeria (SANs). Jegede emerged candidate of the PDP in its primary held also in Akure, where he polled 760 votes to defeat his co-contestant, Hon. Saka Lawal who scored 22 votes.

The election which was conducted by the Chairman of the electoral committee and governor of Bayelsa state, Seriake Dickson was observed by INEC officials, Security personnel, journalists and various electoral observers.

ALSO READ   CJN, NJI Unanimous on Zero Tolerance for Corruption in the Judiciary

No fewer than 840 delegates from 203 wards in the state participated in the primary election.

In his acceptance speech, Jegede thanked the delegates for the confidence reposed in him and promised to build on the legacies of governor Olusegun Mimiko.

He stated that “There was no victor, there was no vanquish, we are all winners. This is purely a family matters within the PDP. We will continue to build court of friendship and bridges of friendship between our people”.

“We will open our doors for all those who are interested in genuine reconciliation. PDP is a big party and for those who are in other side is between light and darkness. PDP is the light and we have seen it in the last one year.

“I offer myself to serve and to take the flag of PDP before humility and gradittude to God, I except this nomination and by November 26, we shall lead PDP to victory.

“Gratitude to all our votes, who are ready, willing and waiting because we must consolidate both to found and old games of our previous administration.

“This indeed is challenges to all of us. The economy is dwindling everyday. The price of diesel has gone up from N135 per litre to N200 per litre. So is the price of bread, so is the price of rice. It is now time to talk about economy, economy and economy by that our people will be happy and build prosperity for our state”.

Earlier in his address, the Chairman of the electoral committee, Seriake Dickson urged members of the party to remain together so as to be able to win the coming election.

In the same vein, Mimiko, while addressing the gathering after the exercise  expressed optimism that PDP would win the November election convincingly.

Interestingly, Ondo State governorship election will be keenly contested for a number of reasons. One, the state is one of the two states under the control of the PDP, out of the six in the South West geo-political zone. As one of the states lost by the progressives since 2003, they have not relented in their efforts to regain its control ever since. The closest they have ever gone to regaining it was in 2012, when Akeredolu gave the incumbent Dr. Olusegun Mimiko a run for his money. The PDP also is also struggling to retain it as a PDP state.

However, as both leading political parties continue in their campaigns and other activities ahead of the November 26 governorship election in the state, it is evident that as matters stand today, one of the these two lawyers cum-politicians will surely emerge as the next governor of the state.