Home News Only judges, not lawyers should be appointed CJN – outgoing CJN 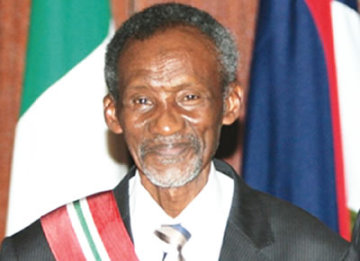 The outgoing Chief Justice of Nigeria, Justice Mahmud Mohammed has warned against politicizing the appointment of the nation’s Chief Justice.

Speaking at the swearing-in of 22 New Senior Advocates of Nigeria in Abuja, Justice Mohammed whose tenure elapses in November, said it was important to address speculations surrounding appointments into the office in recent times.

“Given that this is my last legal year speech, I must use this medium to address speculations that have arisen as regards the appointment to the office of the Chief Justice of Nigeria.

“Permit me to restate that Section 231 of the Constitution of the Federal Republic of Nigeria (as amended) is clear as to the procedure that must be followed in appointing a Justice of the Supreme Court, or indeed a substantive chief justice of Nigeria. The National Judicial Council recommends, the president of the Federal Republic of Nigeria approves, and the Senate confirms such appointment.

“While I would admit that there is no constitutional restriction as to where those to be appointed are selected from; the long-held practice, which I dare say has been apolitical, transparent and fair, has been to appoint the most senior justice of the Supreme Court to the office of the Chief Justice of Nigeria.

“With the exception of two chief justices who were appointed from outside the Supreme Court during the military regimes and in exceptional circumstances, this system has proven to be seamless, predictable, respectable and dignified,” he said.

Justice Mohammed said any other method in appointing the CJN would reduce the office to something that can be lobbied for.

“The idea that we can appoint legal practitioner without the proven experience or the temperance of character, developed through years of active participation in adjudication, may indeed be fraught with risk, none greater than the risk of creating another sinecure of party loyalists or reducing the office of the CJN to the office which can be ‘lobbied’ for. This will undoubtedly and irreversibly hurt our justice system,” Justice Mohammed said.

He lamented what he described as an increased rate of communication of complaints against judicial officers to the Presidency and described the development as disturbing.

“The constitution clearly places powers to exercise disciplinary control over judicial officers in the National Judicial Council. Furthermore, in line with the provisions of the constitution, the Judicial Discipline Regulation 2014 comprehensively sets out the procedure for making a complaint without undue interference from other arms of government,” he said.

Justice Mohammed said members of the judiciary engaged in such acts had been marked for action and would be disciplined.

Justice Mohammed lamented the practice of delaying cases through the use of unethical and frivolous applications by certain members of the bar. He warned that the apex court was taking a dim view of such delays and will introduce measures aimed at reducing delays in the administration of justice.

He warned the new senior advocates and all judicial officers to desist from acts capable of eroding the integrity of the legal profession.

Strike: We’re Waiting for Advice from Our Legal Team – ASUU