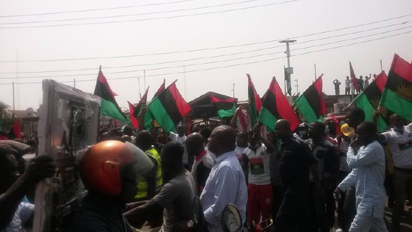 Armed security operatives however barred the protesters from gaining access into the court room where the detained leader of the Indigenous People of Biafra, IPOB, Mr. Nnamdi Kanu was being tried by the Federal Government.

The incident occurred on a day Kanu who is facing trial alongside three other pro-Biafra agitators, Mr. Chidiebere Onwudiwe, Benjamin Madubugwu and David Nwawuisi, was denied bail by trial Justice Binta Nyako.

Shortly after the proceeding, armed operatives of the Department of State Service, DSS, took the defendants away from the court premises in a commando style, even as the protesters threw stones at the prison van. Justice Binta refused to grant bail to any of the defendants pending the determination of the 11-count criminal charge the Federal Government preferred against them.

Charges against the accused persons border on reasonable felony and their alleged involvement in acts of terrorism. The defendants had in the course of the proceeding, alleged plot by the Federal Government to import foreigners to testify against him.

Their separate bail applications were predicated on sections 158, 162 of the Administration of Criminal Justice Act, as well as section 35 and 36 of the 1999 constitution, as amended.

The defendants contended that charges against them were not only bailable offences, but also not felony punishable with death.

Arguing that the presumption of innocence under the Nigerian constitution was in their favour, the defendants said their release from detention would enable them to properly defend the charge against them.

Besides, they insisted that their right to self determination was guaranteed both by the Nigeria constitution and Article 20 of the Africa Charter on Peoples and Human Right. They maintained that IPOB which they said has been registered in over 30 countries, has not been proscribed or declared as a dangerous organisation under any law.

The defendants expressed their readiness to produce reasonable sureties before the court. However, FG, vehemently opposed release of any of the defendants on bail. Government lawyer, Mr. Shuaibu Labaran, told the court that the defendants would constitute “a threat to national security”, once freed from prison custody. Labaran, who further applied to the court for protection of witnesses billed to testify against the defendants, drew attention of the court to the fact that the 1st defendant, Kanu, has dual citizenship. He argued that Kanu who he said has both Nigerian and British passports, would escape out of the country if released on bail. While praying the court to allow the defendants to attend their trial from Kuje prison, FG, stressed that Onwudiwe was a major threat, saying he was the only one facing a particular count of “preparatory to commit an act of terrorism”.

Meanwhile, in her ruling, Justice Nyako, held that charge against the defendants “are very serious in nature”, and therefore not ordinarily bailable. “Irrespective of what the charge is, the court has to exercise its discretion on way or the other”, the Judge held, adding that some of the charges against the defendants could attract life imprisonment if proved by FG.

Justice Nyako also dismissed contention by the defendants that President Muhammadu Buhari had openly directed that they should not be released on bail. The Judge held that President Buhari, being a citizen of Nigeria, was at liberty to exercise his freedom of speech. She maintained that the President lacks the capacity to influence the decision of the court, saying the defendants did not place any new fact or law capable of persuading the court to reverse an earlier ruling of the court that denied them bail. “The offences are serious in nature and carries very severe punishment if proven. “I hereby therefore refuse bail of the applicants. But in the alternative, I hereby order accelerated trial of this matter to almost commence immediately, but not later than two months”, the Judge held.

Immediately after the ruling was delivered, FG, applied for all the witnesses to be allowed to testify behind screen. It also prayed the court for identities of the witnesses not to be revealed in any record of the proceeding. The defendants however opposed the application, contending that granting such request would amount to a gross violation of their rights to fair hearing. “We vehemently oppose secret trial of the defendants. They were accused in the open, we also request that they be tried in the open. The defendants need to see those testifying against them eye-ball-to-eye-ball. We are ready for this trial”, Kanu’s lawyer, Mr. Ifeanyi Ejiofor submitted.

Similarly, one of the defence lawyers, Mr. Maxwell Okpara, told the court that most of the proposed witnesses were foreigners he said the government imported from neighbouring countries. “My lord, we have uncovered their plan to bring Ghanaians and people from Cameroon to appear in this court to testify against the defendants. “We as Nigerians will resist that plot. It cannot work. That is why they are insisting that they should testify behind screen. That plot has failed, it will not work”, Okpara stated. After listening to all the parties Justice Nyako fixed December 13 to rule on FG’s application.

Specifically, FG had in the charge marked FHC/ABJ/CR/383/2015, alleged that the quartet conspired to commit treasonable felony contrary to and punishable under section 516 of the Criminal Code Act, CAP. C38 Laws of the Federation of Nigeria, 2014.

FG alleged that they committed the offence along with others now at large, on diverse dates in 2014 and 2015, in Nigeria, London and United Kingdom. It told the court that the defendant conspired among themselves to broadcast on Radio Biafra which is monitored in Enugu and its environs, preparations they were making for states in the South-South zones and other communities in Kogi and Benue states, to secede from the Federal Republic of Nigeria with a view to constituting same into a Republic of Biafra. Whereas FG identified Kanu as the arrow-head behind the “hate broadcasts”, it fingered Onwudiwe as the National Coordinator of the IPOB movement.

The defendants had on November 8, pleaded not guilty to all the charges against them, even as the court adjourned to hear their bail applications. Kanu was previously facing a six-count treason charge with Madubugwu and Nwawuisi, before FG amended the charges to include Onwudiwe as one of the defendants. Justice Nyako is now the third judge to handle the trial.

It will be recalled that the former judge handling the matter, Justice John Tsoho had on September 26, disqualified himself from presiding over trial of the defendants. Justice Tsoho who earlier denied the defendants bail, premised his decision to hands-off the case on a petition pending against him before the National Judicial Council, NJC. Kanu and his co-accused persons had in their joint petition, alleged that Justice Tsoho indulged in act of “judicial rascality”, by delivering conflicting rulings on the same subject matter.

Justice Ahmed Mohammed who was th

e first judge Kanu was taken to by FG, had in a bench ruling he delivered on December 23, 2015, also distanced himself from the matter. Kanu who was hitherto the Director of Radio Biafra and Television, ‎has been in detention since October 14, 2015, when he was arrested by security operatives upon his arrival to Nigeria from his base in the United Kingdom.

The defendants were alleged to have committed treasonable felony, an offence punishable under Section 41(C) of the Criminal Code Act, CAP C38 Laws of the Federation of Nigeria. FG alleged that they were the ones managing the affairs of the IPOB which it described as “an unlawful society”.

Kanu was alleged to have illegally smuggled radio transmitters into Nigeria, which he used to disseminate “hate broadcasts”, encouraging the “secession of the Republic of Biafra”, from Nigeria.

The IPOB leader earlier denied the charges, even as the court, on January 20, ordered remand of the defendants at Kuje prison ‎in Abuja. Count one of the charge against the defendants read: “That you Nnamdi Kanu, ‘M’, Onwudiwe Chidiebere ‘M’, Benjamin Madubugwu ‘M’, David Nwawusi ‘M’ and others now at large, on diverse dates in 2014 and 2015 in Nigeria and London, United Kingdom, did conspire amongst yourselves to broadcast on Radio Biafra monitored in Enugu and other areas within the jurisdiction of this Honourable Court, preparations being made by you and others at large, or states in the South East and South South zones and other communities in Kogi and Benue States to secede from the Federal Republic of Nigeria with a view to constituting same into a Republic of Biafra and you thereby committed an offence punishable under section 516 of the Criminal Code Act, CAP.C38 Laws of the Federation of Nigeria, 2000”.
Send your press release/articles to: