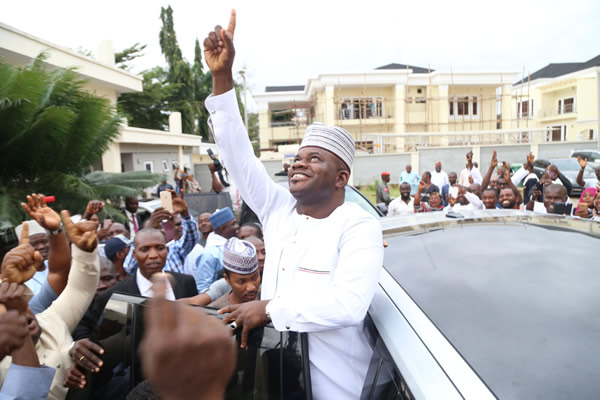 The Supreme Court yesterday, in its ruling affirming Kogi State governor, Yahaya Bello, as the validly elected governor of the state, declared that votes cast in an election belong to political parties, not candidates fielded by the parties.

The ruling by the apex court followed arguments by the counsels representing the various parties in the judgment which lasted several hours.

The Supreme Court’s judgment has brought to an end the entire rancor emanating from the election last year.

In a unanimous judgment, the seven-man panel presided over by Justice Sylvester Ngwuta dismissed all the appeals filed by the immediate past governor of the state, Captain Idris Wada, James Faleke, running mate of the All Progressives Candidate (APC) candidate in the November 21, 2015 governorship election, the late Prince Abubakar Audu and two others on grounds that they were lacking in merit.

The court, however, said it would provide reasons for its decision on September 30.

Faleke had contended that the late Audu won the election hence there was no need for the supplementary election in which Governor Bello was substituted by the APC. He argued further that as the joint holder of Audu’s ticket, he should be declared the winner of the election.

But the justices, who did not agree with him, dismissed his appeal for lacking in merit. The justices affirmed the decisions of the lower courts.

Faleke’s counsel, Wale Olanikpekun (SAN), had in his argument, contended that Bello ought not to have emerged the candidate of the APC, as he was not a part of the process from the beginning. Citing Section 141 of the 1999 Constitution as amended, he pointed out that a person cannot be declared winner of an election in which he was not a participant.

He added that Governor Bello could not, therefore, inherit the votes as he was not a candidate in the election, emphasizing that the Independent National Electoral Commission (INEC) flouted the constitutional provision for the substitution of candidates when it declared the election inconclusive and decided to continue from where it had stopped, after accepting a new candidate for the APC and also argued out that though the law allowed for substitution of a candidate in the event of the death, INEC should have started the election all over, when the substitution was made.

He posited that Faleke ought to have been returned as winner of the poll, having participated in the election until it was 95 per cent complete.

The court also dismissed Wada’s case against Bello after listening to his lawyer, Chief Chris Uche.

The former governor’s lawyer also contended that the APC and INEC were wrong in allocating the late Audu’s votes to Bello.

He said votes cast were not for the APC but the people’s votes for APC.

“A party needs a candidate to conduct an election. The party cannot just bring a person to come and inherit the votes of another person,” Uche said.

Also dismissed were appeals filed by the Africa Democratic Party (ADC) and the Labour Party. The two parties had argued their cases along similar lines as Wada.

However, Joseph Daudu (SAN), counsel to Governor Bello, in his submission before the court, said Faleke’s appeal lacked substance as he had failed to show proof that Bello’s emergence as the APC candidate was wrong and that the votes cast do not belong to him as the substitution was wrongly done, as claimed.

It would be recalled that Audu died before the final announcement of the results of the election, following which the election was declared inconclusive.

The re-run held on December 5, 2015, led to the emergence of Bello as the governorship candidate of the party.

Wada, who contested the election on the platform of the Peoples Democratic Party (PDP) and Faleke had approached the Supreme Court in August, challenging Bello’s victory at the Court of Appeal.

The appellate court had upheld an earlier judgment in June by the Kogi State Governorship Election Tribunal, which gave victory to the governor.

The tribunal, in the judgment read by its chairman, Justice Halima Mohammed, said Mr Faleke’s petition lacked merit and, consequently, threw it out.

The tribunal further held that the fact that INEC declared the first election inconclusive meant no winner had emerged.

It also said that all votes belonged to political parties and not the candidate who contested on their platforms.

It said Faleke had no locus standi to challenge Bello’s nomination by the APC to replace Audu as he (Audu) was not the governor-elect.

‘My Victory, honour for democracy’

Governor Bello, has described his victory at the Supreme Court as a ‘big honour to democracy.’

The governor, who spoke through his chief press secretary, Mr Kingsley Fanwo, shortly after the Supreme Court affirmed his election, said the judgment had reconfirmed the hand of God in Kogi affairs.

He said: “The landmark judgment of the Supreme Court today (yesterday) is a watershed in the annals of electoral jurisprudence and constitutional law in the country. It was a long walk to victory which will reshape the constitution of the nation.”

According to the statement, the governor called on those who contended with him to join him in building a greater Kogi state.

“The victory belongs to all Kogi people who believe in transforming Kogi State from a potentially great state to a really great state,” it said, adding that the governor is committed to serving the people and making the state the centre of excellence,” he said.

He, however, warned supporters against “unbridled” celebration, saying that this moment is a challenge to all Kogites to reflect on how to make the state great.

The governor said he will continue to pursue his cardinal goals of improving education, reinventing healthcare, boosting infrastructural development as well as raising the capacity of the state’s citizens to reinvigorate the economy.

He thanked the judiciary for rising to the occasion by standing firm with what is true and just.

Faleke – Our Electoral Laws Should Be Reviewed

In his reaction, Faleke said he had no regret challenging Bello’s election of as governor in the court.

He stated that he was waiting to get details of the judgment, so as to identify the parts of the country’s electoral law that should be reviewed.

A statement signed by his media aide, Hon. Duro Meseko, noted that Faleke had approached the court in good faith to protect the over 240, 000 votes already garnered by the Audu/ Faleke ticket.

“As a lawmaker, Faleke will be glad to read details of the judgement so as to know which areas of our nation’s jurisprudence require urgent review.

“Hon. Faleke had no regrets challenging the decision to declare the election inconclusive as the step was taken in good faith to protect the interest of the over 240,000 electorates that voted for the Audu/Faleke ticket in that election.”

Meseko said it would amount to a betrayal of the sacred trust of the people who reposed implicit confidence in the Audu/Faleke ticket not to have defended the sanctity of their vote up till the apex court.

Also yesterday, the APC national chairman, Chief John Odigie-Oyegun, congratulated Bello on his victory at the Supreme Court, just as he called on all party stakeholders and members to support the Bello administration.

He said: “Going forward, I call on all party leaders, stakeholders and teeming members of our great party to put aside any differences and unite as a strong political force in support of the administration of the Kogi State governor, Yahaya Bello.”