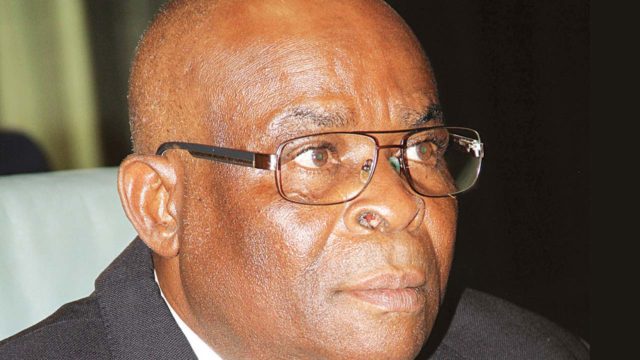 Two weeks to the expiration of the three months tenure of Walter Onnoghen as acting Chief Justice of Nigeria, there is growing disquiet over the failure of President Muhammadu Buhari to forward his name to the Senate for confirmation as substantive head of Nigeria’s judiciary.

The National Judicial Council had on October 6, 2016 recommended Mr. Onnoghen to President Buhari as successor to Mahmud Mohammed whose tenure was to expire on November 9, 2016.

But rather than immediately forward the name to the Senate for confirmation or reject the recommendation, the President on November 10 appointed Mr. Onnoghen to the office in acting capacity. That appointment will lapse on February 10 based on a constitutional provision.

As stipulated in Chapter 7, Section 31 (1) of the Constitution, “The appointment of a person to the office of Chief Justice of Nigeria shall be made by the President on the recommendation of the National Judicial Council subject to confirmation of such appointment by the Senate”.

The Constitution further states in sub-section (5) of the same section that; “Except on the recommendation of the National Judicial Council, an appointment pursuant to the provisions of subsection (4) of this section shall cease to have effect after the expiration of three months from the date of such appointment, and the President shall not re-appointment a person whose appointment has lapsed”.

From the foregoing, lawyers say that unless Mr. Onnoghen’s name is forwarded to the Senate and he is confirmed, he would cease to be the acting CJN from February 10. Mr. Buhari would also not be able to submit his name to the Senate as substantive VC after that date and he would have to be replaced.

According to some legal practitioners, the failure of Mr. Buhari to forward the name of Mr. Onnoghen to the Senate, long after his recommendation, is dangerous for Nigeria and the judiciary in particular.

Speaking on the matter, shortly before the expiration of the tenure of the former CJN, a Senior Advocate of Nigeria, Sebastine Hon, described Mr. Buhari’s delay in processing the confirmation of Mr. Onnoghen as “scary, to say the least”.

“The name of Hon. Justice Walter Onnoghen, the next most Senior Justice of the Supreme Court, has since October, 2016 been forwarded to the President, who is expected, constitutionally, to forward it to the Senate for confirmation.

“Till this moment, Mr. President has not forwarded Justice Onnoghen’s name to the Senate for confirmation. This is scary, to say the least”, Mr. Hon had stated.

But hours after the said expiration of Mr. Mohammed’s tenure on October 10, the president appointed Mr. Onnoghen to fill the vacant position, as stipulated by the Constitution.

As the expected three months during which Mr. Onnoghen can act as chief justice draws near, stakeholders have been speaking on the implications of not submitting his name to the Senate.

Speaking on the development, Rotimi Oguneso, a Senior Advocate of Nigeria, viewed the president as “having a penchant for stirring up needless controversies”.

“This is where I find a problem with this government. It appears the present government has a penchant for stirring up needless controversies.

“The NJC has recommended Justice Onnoghen, who is the most senior judge to be the next CJN. What the president needs to do is to send his name to the Senate and it will come into being”, Mr. Oguneso said.

“The government has not told us; I am not aware of any situation or any disability on the part of Honourable Justice Onnoghen. He has already been recommended even to the substantive office, why make him acting in the first instance? That is where the controversy started.

“The Nigerian government right from the Obasanjo time, do not seem to like the collegial system of appointment; whereby it is the judiciary that has so much say on who becomes the Chief Justice. But the truth of the matter is that if they do not like it; why don’t they push for a constitutional amendment?

“The former President Obasanjo did express his reservations, that the executive doesn’t seem to have so much say; but I don’t see that as being correct. Because there is nobody who is appointed a judge whom the State Security Service will not have conducted an investigation upon. If the president has anything against a certain appointee, he should state it. Why not make it public?” Mr. Oguneso queried.

For another senior advocate, Samson Ameh, the situation is not one that cannot be remedied as the NJC still reserves a constitutional right to intervene.

“The NJC can still intervene and prolong the period, possibly. So as it is now, if the period of three months is to expire, I will recommend the intervention of the NJC to enable the president take the decision that is to be taken,” said Mr. Ameh who encouraged the presidency to ‘act in order to avoid a constitutional crisis’.

Another lawyer, Jiti Ogunye, also said that the situation should not degenerate into something worrisome as many Nigerians presume.

Why We Cut Bank Charges, by CBN