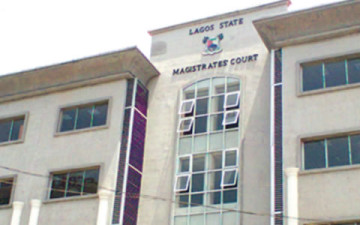 28-year-old man arraigned over an alleged theft of cell phones and Laptop valued at N180, 000 on Tuesday slumped in the dock after pleading not guilty.

The accused, Stephen Nanchan, of no fixed address, is facing a trial of stealing before a Surulere Chief Magistrates’ Court in Lagos.

Immediately the Magistrate, Mrs T.O. ‎Abayomi, noticed that the accused could no longer stand on his feet, she went on a short break.

The police escort in the court took the accused out of the dock as none of his relations was present in the court.

It took the rescue team about 15 minutes before they could revive the accused.

The magistrate later resumed sitting after Nanchan had regained consciousness and admitted him to a bail of N100, 000 with one surety in like sum.

Magistrate Abayomi said that the surety must provide evidence of tax payment to the Lagos State Government with a verifiable address within the court’s jurisdiction.

She adjourned the case until Aug.16, for mention.

Earlier, the prosecutor, Sgt. Oluwagbenga Salami, told the court that the accused committed the offence at the Golden Face Hotel located on Baale Street, Orile-Iganmu area of Lagos on Aug. 2 at about 9.30 p.m.

“One of the phones was recovered from him and he confessed selling the laptop and the other phone at the computer village,” the prosecutor told the court.

ALSO READ   Take A Guess: What Designer is "Squib" Wearing?

Salami said that the offence contravened Section 287 of the Criminal Law of Lagos State, 2015.‎