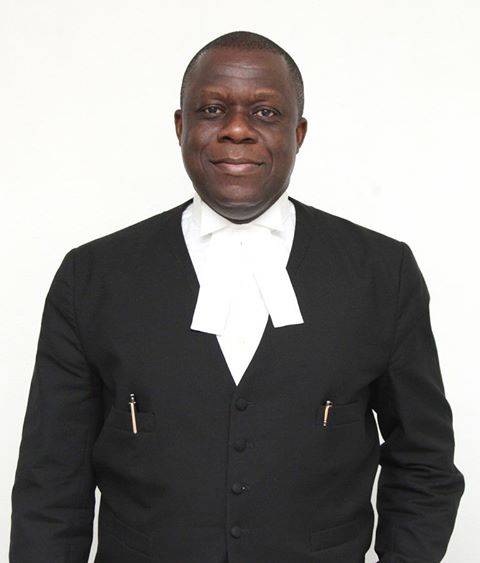 That Nigeria is abundantly blessed with the requisite human capacity; with some of the world’s most brilliant minds strewn across the globe’s exciting professional landscape is stating the obvious. The lacuna however, is the recurring mishap of placing square pegs in round holes! Little wonder, the obvious challenge of the slow pace of the country’s socio-economic development. But the exception to the rule has amply been demonstrated in no other place than the acclaimed Centre of Excellence, Lagos.

With the recent marking of two eventful years in office, one Ministry that the highly resourceful governor, Mr. Akinwunmi Ambode would readily highlight as having keyed into his vision to take the state to the next level is that of Justice. No sentiments here. And that is because he mustered the courage to identify and place the right man – Adeniji Kazeem as the Commissioner who also doubles as the Attorney General of the state. But who is this distinguished Nigerian? What innovative and people-oriented achievements has he brought to the governance table to deserve the national and international encomiums all coming his way? What lasting lessons can the younger generation glean from his illustrious life trajectory? The answers are not far fetched.

Adeniji who hails from Isale-Eko in Lagos Island was born in Lagos, Nigeria on 19th April 1965 to late Honourable Justice Boonyamin Oladiran Kazeem, a former Solicitor General of the Federation and Judge of Supreme Court of Nigeria and Princess Jemilat Adetoun Kazeem, a daughter of late Oba Adeniji –Adele II of Lagos.

The alumnus of the famous Federal Government College Warri proceeded to the University Lagos where he obtained a second class Upper degree in Political Science. That was in 1986, smiling home with a special prize in Comparative political systems. He served his one-year statutory Nigerian Youth service at the Nigerian Institute of International Affairs as a Research Assistant before returning to the University of Lagos to study Law. In a similar fashion he graduated with a second class Upper Law degree in 1990 with a special prize in International Law. He was called to the Nigerian Bar in 1991.

Mr. Kazeem also holds an LLM in Information Technology and Telecommunications Law from the University of Strathclyde in Glasgow, Scotland. His professional career started in 1991 when he joined the International Consulting Firm of Arthur Andersen (Now KPMG Professional Services) and rose to Senior Associate in the Firms Tax and Business regulatory Services Division before voluntarily resigning in 1996. During his career at Arthur Andersen Mr. Kazeem was exposed to varied Tax, Consulting and Business Advisory training and experience.

In 1996 Mr. Kazeem set up the Law Firm of AdenijiKazeem& Co to cater for local and International legal needs. He has since then run the full service Law Firm with offices in Lagos and Abuja. The Firm specializes in litigation and ADR, ICT Law, Intellectual property, Commercial Law and Company Secretarial services to the Public and Private Sector.

Interestingly, he was also the Deputy-Director General and Director of Legal Services of the Akinwunmi Ambode Campaign Organization. That afforded him the opportunity to exhibit his tremendous organizational skills, deploying his intellectual acumen to critically and calmly analyze political campaign trend and evolve the best for Ambode. With an innovative mind, a listening ear and serving as a member of the engine room, he saw to it that Ambode became the only aspirant on the platform of the APC to tour 19 out of the 20 LGAs in the state. This afforded him the platform to identify the people’s most pressing needs at close quarter. The results are obvious for all to see and applaud today.

ALSO READ   LASG Land Use Charge: A Civil Option And Strategic Cause of Action - Yomi Fawehinmi

Good enough, such zeal and commitment have been extended to the Ministry of Justice as the Commissioner, all geared towards evolving a crime-free society since he was sworn into office in September 2015. Amongst his ground-breaking achievements within two years of his stewardship include the Inauguration of Five Mobile Courts for Traffic Offenders, setting up of a Task Force to Tackle Land Grabbers and the Establishment of a DNA Forensic Lab in Nigeria to fight crime.

Others include the Revival of the Crime Data Registry, Amendment/Reform of laws in various institutions in the state, Launching of Online access to state laws and the full Protection of Citizens Rights.

With all these peace-engendering laws firmly in place ridding Lagos of recklessness and impunity on the roads, by the users is only a matter of time. Also the Mobile Courts inaugurated in February 2016 at the Ikeja High Court premises, ensures that lawyers from the Office of the Public Defender (OPD) are readily available to defendants who so desire.

In a bid to check the menace of land-grabbing in the State, perpetrated by land grabbers popularly called Omo-Onile there is currently the full deployment of resources of government to give teeth and bite to Section 281 of the criminal law and Sections 52 and 53 of the law. These prescribe a jail term of two years for any person who forcibly enters or takes possession of land in a manner likely to cause a breach of the peace.

The establishment of the Lagos State DNA Forensics Centre (LSDFC) which took effect in January 2017 is the first ever high-powered DNA Forensic Laboratory in Nigeria. It fulfills an unmet need for DNA profiling which is a unique forensic technique that is now being used all over the world.

And to show that justice is for all the Ministry has departments and statutory agencies dedicated to the provision of free legal services to citizens whose rights have been breached or violated.

That is what democracy is all about. Our felicitations goes to this man of destiny whose eyes are clearly set for the future, to be reckoned with not only in his home state but also in Nigeria and the world at large.