Home Columns Bar and Bench My Administration will have Zero Tolerance for Corruption in Whatever Form –...

The Chief Judge of Lagos State, Justice Opeyemi Oke has reinstated her commitment to fight corruption, which according to her, has given the Lagos judiciary a bad name.

Justice Oke stated this on Tuesday during the commencement of a four-day workshop for staff of the judiciary.

Speaking at the workshop tagged ” towards an efficient and effective administration of justice system in Lagos State, Justice Oke said that it is now a new dawn in the Lagos State Judiciary as her administration will not tolerate vices of any form from any member of staff.

Oke noted that the judiciary has lost the confidence of the public due to allegations of corruption in the system and urged members of staff to to turn a new leaf and join her in serving court users in an efficient way so as to bring back confidence in the Judiciary.

She said: “The essence of this workshop again is to promote a new ethical orientation into the consciousness of all staff. It has become necessary to do away with the old spirit of doing things and for a new spirit which will give positive image to the Lagos State Judiciary. We must imbibe a strong sense of integrity, a positive attitude to work and we must hold ourselves accountable to the highest standard of performance.

“We must work for a transparent, efficient and timely judicial administration that will restore hope, repose confidence and inspire respect for the Judiciary and make it indeed the last hope of the ordinary citizens. We have to be truthful to ourselves that we have lost the confidence of the public, primarily fuelled largely by allegations of corruption in the system.

“This goes beyond the issue of bribery among members of staff but it extends to other administrative duties like orchestration of disappearance of case files, alteration of court orders by registrars of court, disappearance of Judge’s note or exhibits, illegal execution of Judgments, depriving the State Government of its revenue by failure to issue receipts for fees paid or issuing of fake receipts to mention a few.”

The Chief Judge further noted that other stakeholders like the local branches of Nigeria Bar Association and Judiciary Service Commission are already working with her to ensure that corruption is uprooted from the Lagos judiciary.

” I must not forget to mention that all the Hon. Judges of the Lagos State Judiciary are with me in the fight to eradicate the decadence that have been part of the system for a few years back now and so also the Members of the Bar.

“This is the first time we are having the Executive Members of all the five branches collaborating with the administration to fight the decadence. They are working on curbing corruption within the Bar and formulating Rules that will eradicate such when they come to transact their business in our offices.

“Apart from this, we also have individual groups offering to join me in my mission to build a new Lagos State Judiciary, free of negative vices,” she said.

She warned that henceforth, any member of staff found wanting in his/her duties would face disciplinary action and will be shown the way out of the system. 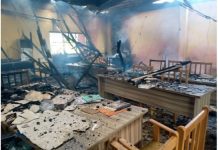 Echoes From The Court Room: “My First Court Appearance”