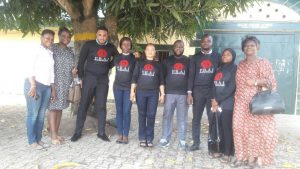 A member of the Prisoners Right Advocates Initiative (PRAI) Volunteer Team, Mr. Yusuf Tenimola Nurudeen has stated that allowing inmates to vote during election may compel politicians to take the rights, need and interests of prisoners seriously. Mr. Yusuf said this at the first ever PRAI Prisoners’ Rights Sensitization Program held at the Kirikiri Female Prison on Saturday.

Mr. Yusuf was speaking as one of the panelists during the session held at the prison premises.

In his opening remarks, the Director of PRAI, Mr. Adetola-Kazeem said that a lot of conferences and discussions are going on out there on prison reforms and prisoners’ right but none of it has been held in any of the prisons facilities. “This is the first time in the history that session will be held in the prison to educate inmates about their rights and to also get their contributions on the way forward.”

“Some of these talk shows have failed because the main stakeholders are not put into consideration”. “Today, PRAI deem it fit to take the panel session down here to educate you about your rights so that when the prison’s head or some of your lawyers come around, you will be able to ask reasonable questions. We are not here to preach Christianity or Islam, we are here to educate you and get some responses from you”.

It was the first time a panel discussion focused on Prisoners’ Rights is held in prison in Nigeria.  The inmates complained about dubious lawyers who defraud inmates and the illegality and high handedness of Lagos State Task Force that arrest innocent Lagosians and arraign them before magistrate who sentence them to imprisonment terms of up to two years and fines running into hundreds of thousands without fair hearing. PRAI is committed to ending the menace of dubious lawyers and the illegal activities of the Lagos State Task Force.

The programme which had one hundred and thirty-nine (139) female inmates in attendance started at about 12:47 pm.

Other speakers who shared their views and experience were Madam Fisayo Bimbo who told an inspirational story of her  experience with the participants. She said the first time she arrived the prison, her blood pressure rose to above 220/100mmHg. It was so dangerous that it almost caused her stroke but she fought hard to live to be able to witness today. She implored the participants to be focused, stay positive about leaving the prisons, forget what brought them into the prisons and forgive whoever caused it because sometimes God may want to put us in seclusion so that we can face him and look up to him.

Speaking further, she urged them to learn the vocational skills that are organized for them. “To be able to fit into the society when you come out, you need to be emotionally and spiritually strong to be able to hit the ground running. At that time, you need these skills to survive”.  “When I was here, I taught English Language and formed a debate team. Some of these debaters are out of here. They meaningfully engaged themselves and when the opportunity present itself, they were some of those that were recommended for discharge” she added.

In addition, Mr. Yusuf explained to the participants that they have their fundamental human rights protected in the 1999 Constitution of the Federal Republic of Nigeria except that they have been curtailed from enjoying some others till they leave the custodial premises. Some of which are; Rights to; private Family life, expression, movement, Association 37, 39, 40, and 41 respectively.

However, for those who have not been sentenced, their right to life, dignity of human person, personal liberty, fair hearing, religion, discrimination amongst others as contained in sections 33, 34, 35, 36, 38, 42 and 43 of the Constitution have not been curtailed.

On the debate whether or not prisoners should vote in 2019 general elections, Yusuf said that there is no provision of any of our laws denying prisoners the right to vote. He relied on the provisions Article 21 of Universal Declaration of Human Rights (UDHR), Article 25 of International Covenant on Civil and Political Rights (ICCPR), Article 3 to Protocol 01 of European Convention on Human Rights and Fundamental Freedom (ECHR) and Article 13, African Charter on Human Rights.

He stated thus “Though, disenfranchisement can be based on criminal conviction in the United States of America as held by the Supreme Court in California but in South Africa, prisoners vote while they are in prisons. Within the Europe, prisoners vote in Denmark, Sweden and Switzerland but this right depends on the level of the offence and length of sentence in other 13 European Countries. Even in the United Kingdom, the matter has been subjected to debate in the House of Commons”.

“Our streets are rife with blue and white-collar criminals convicted, on bail or awaiting trial but they are not within the custodial facilities like this, they would be allowed to vote. Then, people here should not be differently treated, since 70% of the inmates are still awaiting trial. Perhaps, if voting rights were given to prisoners, our politicians would take the rights, needs and interests of some 68,686 inmates seriously” he concluded.

For another panelist Mrs. Blessing, she addressed the aspect of the relevant provisions of the law. Discussing about the new innovations in the Administration of Criminal Justice Act (2015) and Administration of Justice Law of Lagos State (2011) that help the quick dispensation of justice  Mrs. Blessing said “the new laws are meant to reduce the clog in the will of access to justice, reform the prison system and reduce the numbers of awaiting trials”.

In addition, she cited Section 414 on sentencing of pregnant women. “The new law provides that execution shall be delayed till the woman gives birth  and wean the child. Section 415 provides for the procedure to be followed in the conviction of a pregnant woman.
In Section 486 where the law provides that the court may on the recommendation of the Controller General of Prison, direct the release of a prisoner before the completion of her  sentence where the prisoner has served one-third of his term when sentenced to a period of not less than 15 years and can be proved to be of good behavior”.

On her part, Dr. Funke spoke about the rights of the inmates and the appalling conditions they live in. She attributed the sorry state of the prisons facilities to government’s ineptitude, the value we place on human life and lack of some fundamental knowledge about human rights that have brought some of the inmates to the prisons.

In the question and answer session, Angela (not real name) lamented the situation in the prisons and pleaded for interventions from well-meaning Nigerians. She said “it is the corruption in the larger society that brought some of us here. Some need just N10,000 (ten thousand naira only) to pay the option of fine. Many landed here and are disconnected from their family. You need to help us”.

Most inmates who spoke lamented the high handedness of the Lagos state task force who arbitrarily arrested them for no just cause and the magistrates who sentenced them  to prison terms of up to 2 years with options of fines running into hundreds of thousand naira. They equally lamented the activities of dubious lawyers who take advantage of their situations by collecting huge sums of money from them and their families without proper representation.

Closing, Mr. Ahmad pleaded with the inmates to be calm and  be of good behavior in case there is an opportunity for the prison authorities to recommend someone for discharge. He equally promised that PRAI legal team will carry out a thorough investigation on the activities of the Lagos State Task Force and dubious lawyers defrauding inmates in the coming weeks. He promised to ensure that those found culpable are brought to book.

Refreshment was served to participants and PRAI Volunteer, miss Mobolaji Olorishade donated some pillows for the new prison cells. 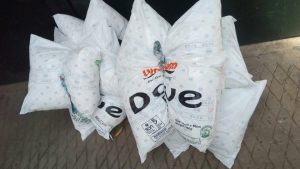